Our Als Play it Safe Against a Tigerish Opponent

Our Als Play it Safe Against a Tigerish Opponent

“We played well in the first half, with a lot of our guys, and it didn’t go as well in the second half. There are things to fix, but we have a good feeling on what happened,” said Khari Jones in his post-game press conference. It’s a gamble you have to take as a Head Coach: do you play all your guys for the fans or do you choose to be cautious and let some key players rest to make sure they’re healthy for the playoffs? While our opponents chose the former, Khari Jones played it safe even it meant losing 26 to 38.

After a creative display by the offence in the initial 30 minutes of play, our Alouettes were leading 21 to 14 at half-time. It only took Geno Lewis half a quarter to pass the 1,000-yard mark he so badly wanted to hit for the first time in his career. Once again, the receiver offered a convincing 100-yard performance and even played leapfrog over his rivals.

While the first two touchdowns were brought to us by Vernon Adams and his receivers Quan Bray and Jake Wieneke, the third was the result of Matt Shiltz finding Chris Matthews 15-yards down in the end zone. And Matt did not disappoint, throwing for 142 yards just as many as Vernon. Football is a team sport. That’s what backups are for, that’s what number twos are for: being ready when their names are called out. When the superstars are not playing, it allows some less experienced guys to get the reps they need to improve and, for some, literally show they still got it. While he can hardly be considered a backup and certainly not less experienced, Jeremiah Johnson sure took advantage of his teammate’s Will Stanback absence. In 16 carries, JJ rushed for a total of 105 yards, once again showing off his slick moves in addition to his key blocking skills. His son Isaac was there to see it all and admitted he was very proud of his daddy. 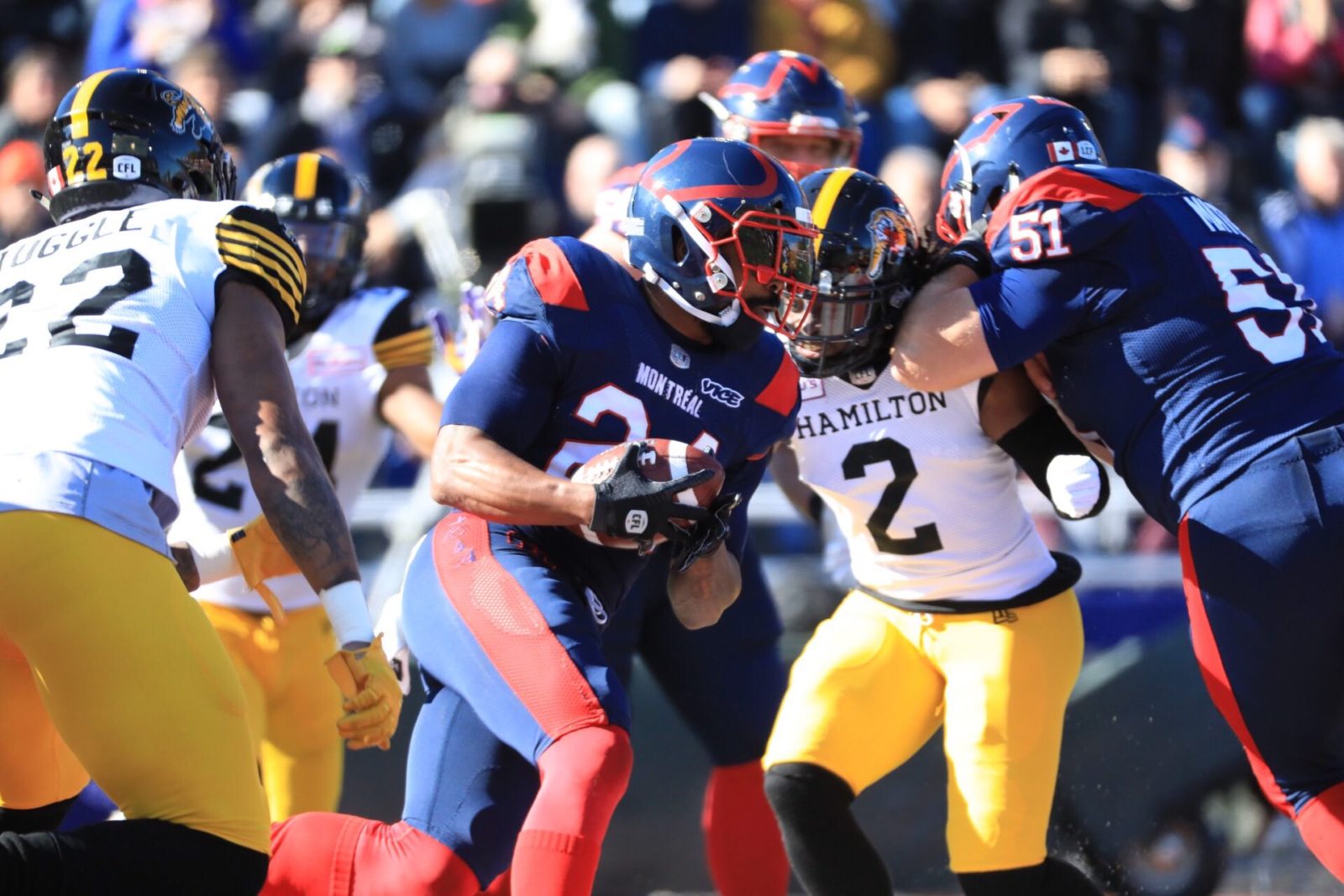 On the defensive side, DB Najee Murray had big shoes to fill. Having started all three games since his return with the team, he took over Tommie Campbell’s corner yesterday going up against some of the top receivers in the league. While Najee led the team in tackles with six, the defensive unit will certainly have to regroup and find a way to adapt their pass defence to the airborne threat that is the Ticats offence. If both teams meet again in the Eastern Final, Brandon Banks absolutely cannot gain 201 receiving yards and three touchdowns. Absolutely not.

The good news is our number ones beat theirs and our number twos put up a good show, even when the starters were still on the field on the opposite side. Like we’ve been saying since the beginning of the season, we have the talent and the heart to beat any team. And seeing how the Ticats were trying to get in our guys’ heads, they probably know it too.

The challenge our squad will face in the upcoming weeks, especially if we meet again with Hamilton, is to find the perfect balance between keeping the rivalry alive and staying disciplined. Things definitely got heated early on the field yesterday and, let’s face it, they always will as long as Simoni Lawrence is there. But we can’t let that get the best of us, we can’t start playing the same game. Regardless of how much our opponents are talking trash, penalties for roughness, rough play or face mask shouldn’t happen. They’re too costly.

Next week, our Alouettes will be travelling to Ottawa for their last game of the regular season before taking on the Edmonton Eskimos at home in the Eastern Semi-Final. With Harris back in the mix, it should be an exciting matchup. Still haven’t purchased your tickets? Make sure to get them now!