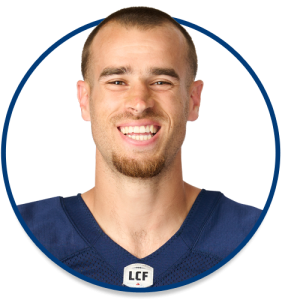 2022 : Signed an extension with the Alouettes

2021 : Signed a one-year contract extension with the Alouettes on January 19

2018 : Signed as an undrafted free agent with the Vikings

2021 : Wieneke played in all 14 regular season games where he had 56 catches for 898 yards and a league-leading 11 touchdowns. At the end of the season, he was named a CFL All-Star.

2019 : He played in all 18 regular season games in 2019 where he recorded 41 receptions for 569 yards and eight touchdowns. At the end of the year, he was awarded the Frank M. Gibson Trophy as the East Division’s Most Outstanding Rookie.

After redshirting in 2013, Wieneke was the runner-up for the Jerry Rice Award as the Football Championship Subdivision’s top freshman the following year. He garnered second-team Associated Press (AP) All-American status and his first first-team All-Missouri Valley Football Conference (MVFC) nod after catching 73 passes for 1,404 yards and a school-record 16 touchdowns. Wieneke finished his collegiate career as the Missouri Valley Football Conference career leader in receptions with 288, in receiving yards with 5,157 and in receiving touchdowns with 59.