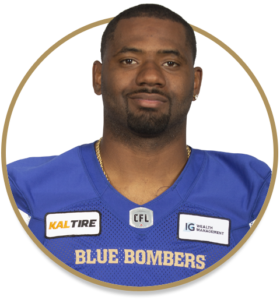 2018: Stampeders
Matthews returned to the CFL after four years in the NFL with the Calgary Stampeders last October and appeared in four regular season and two playoff games, including the 2018 Grey Cup. He had 12 receptions for 252 yards and a touchdown in the four regular-season contests and added seven catches and 98 yards in the playoffs.

2014-2017: NFL
After his first stint in Winnipeg Matthews landed a deal with the Seattle Seahawks, signing in February of 2014. Matthews played in nine games for Seattle in 2015 before being released in November of that year. He then joined the Baltimore Ravens’ practice squad and was activated on December of 2015, scoring his first touchdown on December 27th. Matthews missed the 2016 season due to injury and then suited up for six games for the Ravens before being released in November of 2017.
Matthews played in a total of 25 regular-season and playoff games for the Seahawks and Ravens, with his best performance arguably coming in Super Bowl XLIX in which he had four catches for 109 yards and touchdown.

2012-2013: Blue Bombers
Matthews came to the Bombers in 2012 after a 2011 season in which he signed as an undrafted free agent by the Cleveland Browns in 2011 and, following his release, then played with the Arena Football League’s Iowa Barnstormers. His first year with in Winnipeg was sensational, as he appeared in all 18 regular-season games and led the team with 81 catches, 1,192 receiving yards and seven touchdowns while being named not only the team’s top rookie, but the CFL’s Most Outstanding Rookie. He had six 100-yard games that season. Matthews was limited to just four games in 2013 due to injury, and finished the year with 14 receptions for one touchdown. Following that year he was released to pursue NFL interest.

College :
Matthews played two seasons (2009-10) at the University of Kentucky, making a total of 93 catches for 1,279 yards and 12 touchdowns. As a senior in 2010, he had 61 receptions for 925 yards and a team-leading nine scores. Prior to transferring to Kentucky, Matthews attended Los Angeles Harbor College for two seasons. In his sophomore season in junior college, he had 80 catches for 1,235 yards and 11 touchdowns in nine games.