When Passion Leads the Way

When Passion Leads the Way

One step at a time is how we’ve approached the 2019 season. It’s a good thing since each one of the steps taken was crucial in turning our ship around. Whether it was refreshing our brand, changing our logo, naming a new Head Coach or re-signing and acquiring key players, every single piece of the puzzle was necessary to finally assemble the bigger picture. Here we are now, days away from our first playoff game since 2014. Days away from what is another step in the right direction and, hopefully, not the last.

Our Alouettes will face the Edmonton Eskimos on Sunday in the Eastern Semi-Final after following an odd trend since the mid-season. They’ve won, lost, won, lost, won… you get it. The last two weeks have been no exception. The team fell short to the Tiger-Cats at home, then defeated the Redblacks on the road. Winning against the Eskimos would mean breaking that trend, but that wouldn’t be surprising. Swimming against the current is pretty much what we’ve been doing all year.

“What I’ve loved the most about this team so far is its ability to rise up to the challenge,” says Khari Jones who truly believes this group has what it takes to make it to the big game. “I think they will do it again this time. It’d be a nice time to have our first four-game winning streak.” 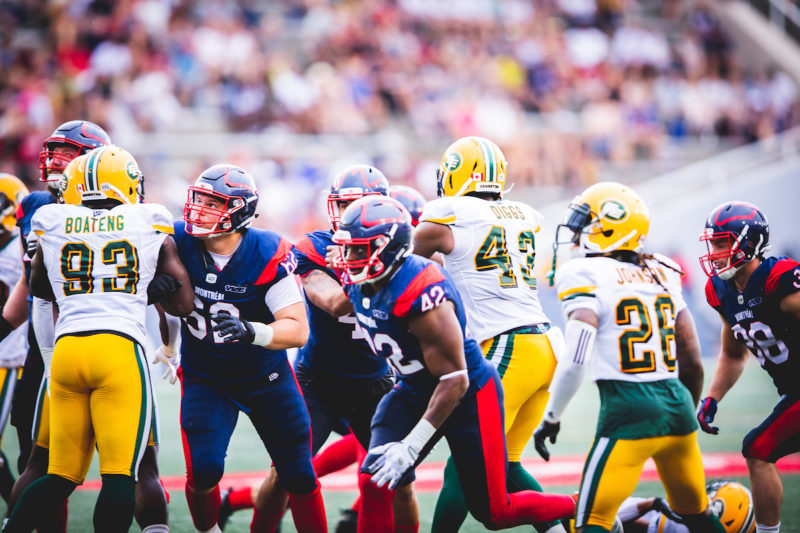 While other organizations may have written their own success stories this season – the Saskatchewan Roughriders, for example, certainly proved doubters wrong with Cody Fajardo at the helm -, none compare to our unexpected comeback. Because, honestly, who doesn’t prefer a good underdog story, especially when it’s about literally the underdog of underdogs? That’s us. That’s our story. As a matter of fact, some of our team members had such a big learning curve ahead of them that nearly everyone thought the organization was set for another six months of failure. Our Defensive Coordinator, Bob Slowik, knows all about the trials and tribulations that come with that learning curve. Shortly after he was given the reins of our defensive squad, the team suffered two consecutive losses to kick off the season, the first was against the Edmonton Eskimos.

“It was a huge, huge learning curve. I was happy to have guys like Henoc and John Bowman to help me along,” Coach Slow admits, thinking back to his first days in the CFL last May. “We made tremendous progress together since that first game in Edmonton. It was very difficult at first because the preseason is so short, you hardly have time to learn who your players are, and, in my case, to understand the game. Once we got a feel for where the players belonged, we found a little niche that we did well, then our opponents caught on to that, so we kept building and evolving.”

Indeed, the team that started off 0-2 has grown immensely since falling short in Edmonton in early June. Some of it has to do with placing assets where they fit best and finding the right mix of schemes. A lot of it has to do with confidence and fun. Every day our guys hop on the field, they do it with a smile of their face. Rarely have we seen a group that takes so much pleasure in coming to work in the morning, or coaches warm-up with their players and dance on the sidelines. Our squad might not be the best in many categories, but it certainly is the best at making you feel all the feels. And feeling good is great! Being an emotion-driven team is great! As long as you don’t let your passion turn into fury.

Going into this initial week of playoffs, discipline will play an important part in our success. Our men have lost their cool a few times this season, notably in the recent game against Hamilton, and according to both Khari Jones and Bob Slowik, it can’t happen again. After our last loss at home, Coach Slow told his group the following: ”You can be passionate, but the minute passion turns into fury, it hurts your team. Fury is uncontrollable anger. It can’t happen. Passion is good. Fury is not.” 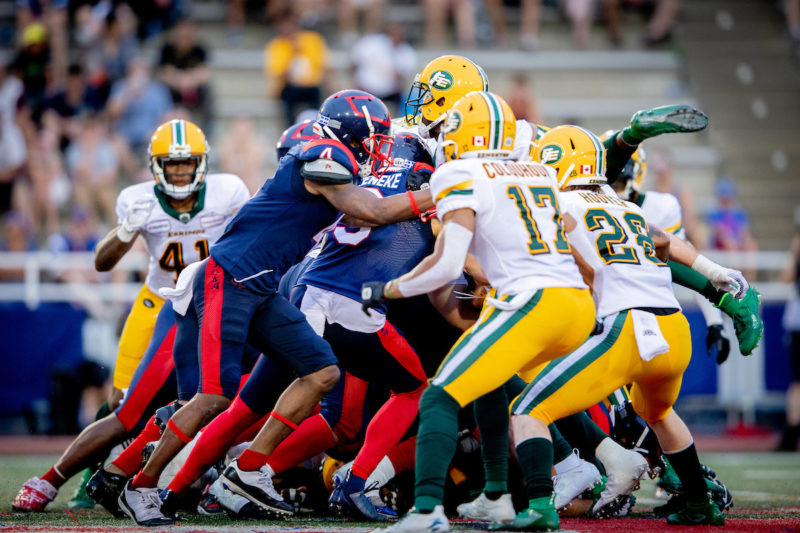 Fury is not who we are either. While the Eskimos don’t have the same trash-talking skills as Simoni the Tiger-Cats, our team will have to make sure not to let anyone who crosses its playoff path dictate its ways. At such an important time, the fine line between ardour and unruliness is a very dangerous one to cross.

“It’s not who we are. I don’t like it and I’ve addressed it,” Khari Jones explains. “I like the fire and passion that our team has, but the guys have to know when to cut it off. We will not let others dictate how we act.”

Nor will we let others dictate how we play.

“I want the group the stay the same, to still have as much fun. I still want them to stay who they are.”

The first to hear that message should undoubtedly be Vernon Adams Jr. As the starting quarterback of a team that’s been struggling to find a quality pivot for years, he’s been under quite intense scrutiny. Throughout the season, Vernon was criticized for taking too many risks, throwing into coverage too much, running too often, not running enough, and the list goes on. At this point, the only thing that should be said about Vernon is how he has proven himself to be a great and exciting leader. Vernon came off the bench when Antonio Pipkin went down early in the season and the team has never looked back. While he’s not new to the pressure and excitement of the big stage, Vernon will be leading the offence at his first professional playoff experience this weekend. After a prolific college career during which he led the Eastern Washington Eagles to the Big Sky Conference Championship and the NCAA Division 1 Semi-Final, Vernon bounced around from one CFL city to another. Now, he’s finally getting his shot.

“The biggest thing you can say about a quarterback, above anything else, is whether he helps winning football games or not,”  says Khari Jones who was placed under the same limelight during his playing years. “That’s what Vernon has done for this team. He’s helped us win and I want him to use everything that’s in his arsenal to keep helping us win.” 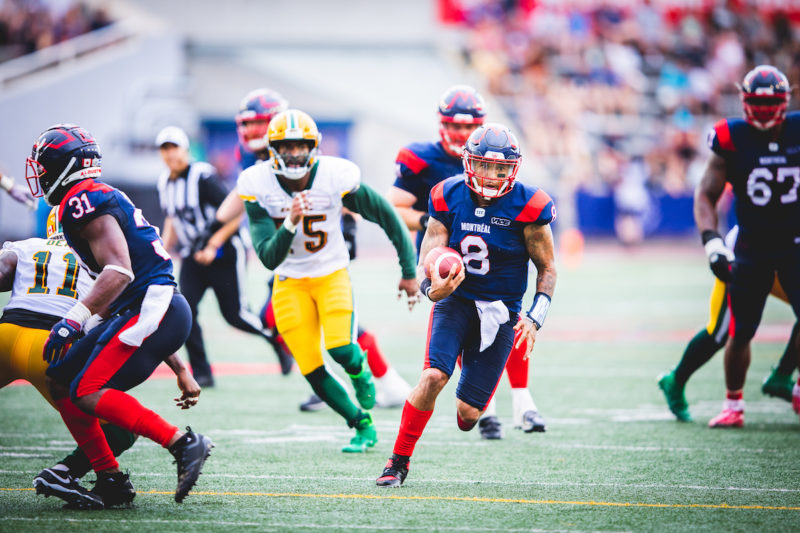 Luckily, VA can rely on even more than his own quickness and strength. His arsenal includes a wide selection of targets who have greatly contributed to taking our squad to the next level this season. From Will Stanback and Jeremiah Johnson to the group of receivers, our QB can count on guys who show poise under immense pressure. According to the Head Coach, rookie of the year Jake Wieneke and East All-Star Geno Lewis certainly deserve high-praise.

“Jake does everything we ask him, blocks more than anybody, does the little things more than anybody. He never complains about anything and he continues to get better. Geno, well, you know his receiving prowess, but I just can’t say enough about his work ethic. Their teammates around them see that and it helps.”

If the olinemen also continue to perform like they have been in the past weeks, the offence should be able to produce more awe-inspiring plays come Sunday.

On the other side of the ball, with Trevor Harris being back under centre and CJ Gable potentially coming out of the injured list, the defence could be facing an interesting two-dimensional challenge. Nevertheless, Harris was playing in both of our matchups against the Esks this year. Surprisingly (or not if you’ve been paying attention to the details), the decisive factor in their win was the run game. CJ Gable rushed for over 150 yards that day, literally carrying his team to the dub. A month later, the factor was no-more. Coach Slow knew what kind of weapons his opponents possessed and he still remembers them quite well too.

“What they do best honestly is run the ball. They also block extremely well, they might be one of the best blocking teams we’ll come across. It’s not just their offensive line, it’s also their perimeter blockers.” 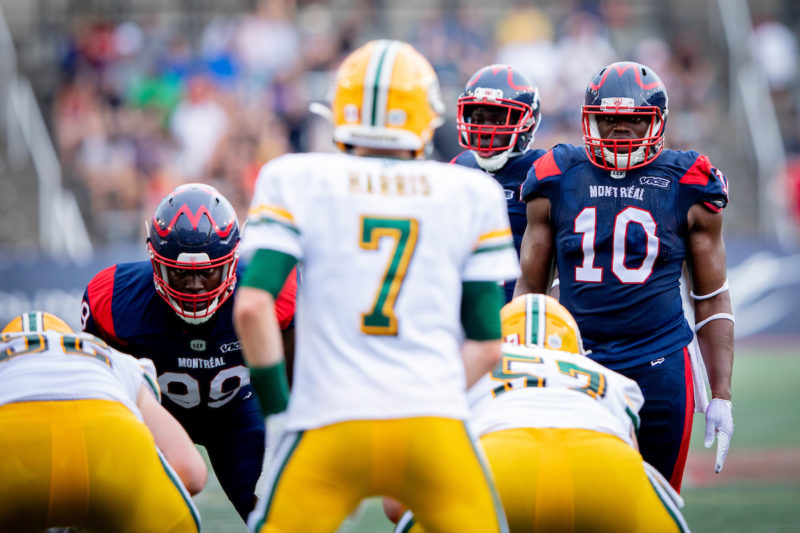 If Coach Slow is mostly concerned about Edmonton’s run game, it’s also because he can provide a clear explanation as to what seemed to slow down the pass defence recently. Over 300 passing yards were allowed against Hamilton, which doesn’t necessarily come as a surprise, but also against the Redblacks, who didn’t have the most productive offence this season to say the least.

“It was caused by miscommunication because of new elements on the field. Against Hamilton, my buddy Speedy B got us,” he admits with a smirk. Little known fact: Brandon Banks, star receiver of the Hamilton Tiger-Cats, was with the Washington Redskins when Coach Slow was there. An advantage perhaps? In addition to having new players on the field, there was a lot of noise. Which is NOT a bad thing. “The fans are so loud and exciting. They’re as passionate as any group I’ve been around, and that’s even if the stadium is smaller. The more noise when we’re on the field, the better because it disrupts the opponent’s offence. It was, however, a learning experience for us because we couldn’t hear each other. We studied our sign language though, we’ll be fine next time.”

The whole squad is ready to hear you in the stands. The power of the 13th man has never been so real. Imagine how good it feels for these guys to finally know the city is behind them after years of doubt. They need your support more than ever, and, rest assured, they will give their all on the field in appreciation of your presence.