Read the first part of the story here: https://en.montrealalouettes.com/2021/04/16/1-2-marc-antoine-dequoy-defies-adversity-resilience-determination/

(2/2) At the time of writing, it’s been over a year and a half since the majority of our guys last played football. After such a long break, good preparation should not be underestimated….

“When you face so much uncertainty, the motivation to train isn’t always there, but if you arrive at camp and you’re not physically ready, the risk of injury increases exponentially.”

“Since the gyms were closed for such a long time in our province, us Quebecers are going to have to work twice as hard to make sure to arrive on the same level of fitness than the guys who had access to more equipment”

“We are going to build on his strengths and help guide him through the mental part of the pro game. Playing at home is an incredible experience for a young athlete because of all the support, but it also adds pressure. I’m going to enjoy seeing this young man grow into a professional.

What makes his experience with the Alouettes even more special is the fact that he is going to be working under the watchful eye of his former head coach, Danny Maciocia, who is now the team’s general manager. Maciocia, who saw him evolve with the Carabins and shaped him into the player he is today, has only positive things to say about his pupil.

« Dequoy is an exciting player, and our fans will enjoy watching him play. He can run and cover lots of ground, and once the ball is in his hands, he can turn it into a touchdown. He can play multiple positions as a defensive back and is a valuable contributor on special teams.” 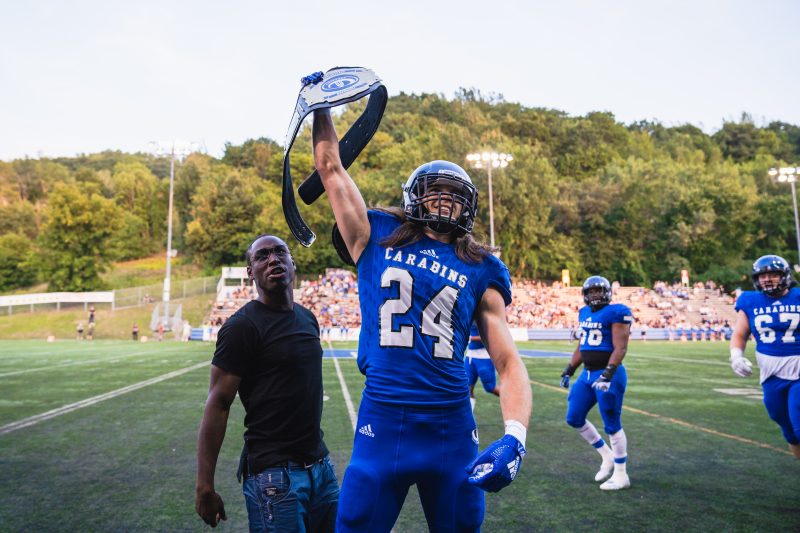 Even though he will be facing lots of unknowns at the start of his first season in the nest, Dequoy will be seeing many familiar faces in the locker room, considering the number of former Carabins and local players that joined the team in 2021. At the moment, there are no less than 24 Quebecers on the team.

« Danny always found it important to focus on local talent. As Quebecers, we feel so proud to put on the Alouettes’ jersey and play in front of local fans. There’s a strong sense of belonging that you can’t find elsewhere. And I think that the fans are also proud to be supporting guys from here.”

Even if his focus is completely on the upcoming season and on his professional football career, Marc-Antoine emphasizes the importance of finding additional passions and hobbies.

“When I’m going to retire from football, I’d love to into programming and video game development. At the moment I’m doing it for fun, because I have a passion for it. I’ve always been curious and wanted to understand how to build video games, so I opted to study in that field.”

Despite his love for video games, sports have always occupied a prominent and essential place in Dequoy’s life. It was a way for him to spend his energy and help him better focus in school. Due to the pandemic, a majority of kids are deprived of this outlet, and Marc-Antoine understands how hard this can be for them.

“Without sports in high school, I don’t know how I would have pulled through. Moving is so important. To all the kids and teens out there, I encourage you to go to the park, spend time outside it starting and enjoy the warmer weather. Take advantage of this period to try new things and get out of your comfort zone.”