If you’re looking for an underdog to root for, look no further than Marc-Antoine Dequoy.

He’s a six-foot three and 190-pound athlete who played only five football games in his four post-high school years but became one of the most decorated collegiate players of the province, was recruited by the Packers, and signed a contract with the Alouettes.

How does that happen? With incredible amounts of guts, determination, and perseverance.

Having played football since the age of five, Dequoy decided to take a break from his sport when he started CEGEP. There’s a saying that goes “You don’t know what you have until it’s gone”. That was the case for Marc-Antoine, as time away from football made him realize how much he missed the game. He tried his luck with the Montmorency College Nomades as a walk-on and immediately earned his spot on the team. But over the next three years, he only played five games, namely due to ongoing injuries.

Dequoy knew he had a long way to go to get to the next level. “After my three years with the Nomades, I wasn’t very known, I hadn’t had the opportunity to prove myself. My former head coach at Montmorency College, Paul-Eddy St-Vilien, had moved on with the Carabins. He knew what I was capable of and was rooting for me. Danny Maciocia also saw that I potential and the pair recruited me to join the Carabins.”

The young hopeful starts his collegiate career with the Montreal University Carabins by filling in on special teams, posting 9.5 tackles while appearing in five games. His performance is good enough to get him promoted to the position of starting defensive back the following year and is voted the Defensive Player of the Year in the province in 2018. In his fourth and final collegiate season, Dequoy records 34 solo tackles and seven assisted tackles, on top of making three interceptions, including one for a touchdown, which earns him an All-Canadian selection and an RSÉQ All-Star selection. 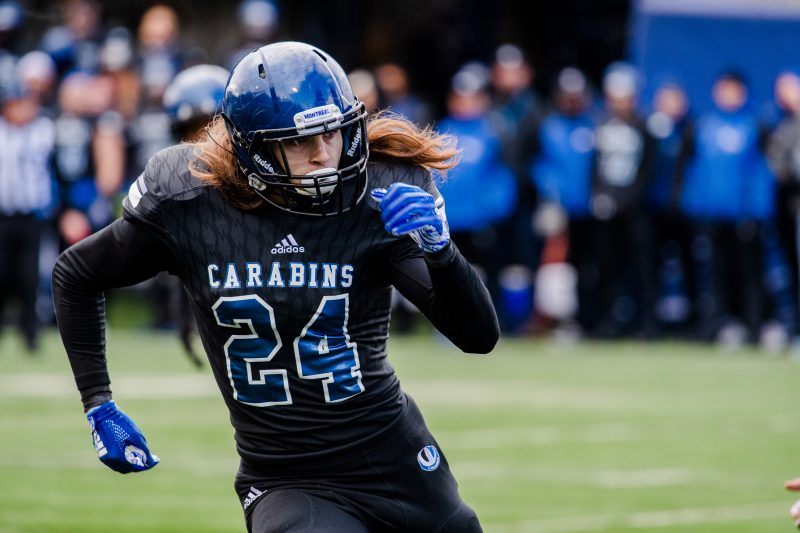 He leads his team to the Vanier Cup, but on the first defensive play of the game, Dequoy fractures his forearm. The timing couldn’t be worse…he’s supposed to compete at the East-West Shrine Bowl a few weeks later.  Getting an invitation to this event is an incredible honor and a once-in-a-lifetime opportunity for any aspiring professional football player. It has featured a number of Canadian prospects in the past who eventually made their way to the NFL, including Quebecers Laurent Duvernay-Tardif and Antony Auclair, who both won the Super Bowl. No big deal.

After a lot of rest and rehabilitation, his arm is in good enough condition to allow him to participate in the practices, but the doctors don’t clear him for the East-West Shrine game. Nevertheless, he retains great memories from his experience.

“That week gave me a boost of confidence and a great dose of motivation for the upcoming draft. It was an incredible experience and I consider myself very lucky to have had that opportunity.”

On March 9, 2020, he becomes the second player in Carabin history to participate in an NFL Pro-Day. Two days before the event that could forever change his life, he catches the flu. His entire body is aching and his breathing is labored, but against all odds, he delivers breathtaking performances (no pun intended), including a 4.35-second 40-yard dash and a 6.65 in the three-cone drill. He records a 37-inch vertical and 10-foot, 8-inch broad jump.

“I felt weak, but considering the state I was in, I’m proud of my results. I have to admit that the next day was pretty rough,” he said laughing.

When so many bad lucks happen over and over again, feeling defeated and sorry for yourself is a trap many would fall in. But for Marc-Antoine, throwing the towel was never an option. He has this special way of dealing with hardships, and it’s this very mentality that separates good players from outstanding athletes.

“Focus on what you can control, and execute. When you’re anticipating what’s going to happen, you can’t concentrate on the present moment. I was sick. Stressing about the fact that I was sick wasn’t going to change my situation. I had a plan, and I was not going to let the flu stop me.”

His performances were enough to cement his status as one of the most intriguing Canadian defensive backs available and get attention from the Green Bay Packers, who offered him a contract as a free agent. He participated in the Packers’ virtual Rookie camp and was about to start training camp when he received some bad news…He was one of the last two rookies to be cut from the team.

“Although I only got to spend a short amount of time there, it was incredible. I noticed the level of professionalism that everyone exuded, from the players to the coaches and the management. Having the chance to observe athletes like Aaron Rodgers, Kevin King, and Jaire Alexander was very inspiring. I would say that I came out of there a better football player and someone who better understands the business. When you play collegiate football, you do it for fun, but at the professional level, it’s your job and you have to deliver.”

Despite the justifiable disappointment, Dequoy, who was the Alouettes’ first pick in the 2020 CFL Draft, was coming back to Montreal knowing he had a spot on his hometown’s team.

“I grew up watching the Alouettes play. Although I was disappointed to see my time with the Packers end, I was so happy to come back knowing that I would play for Montreal.”

Upon his return, the CFL announced the cancellation of the 2020 season. In the space of a few days, the defensive back saw his pro football career plans A and B vanish. It was another slap in the face, but true to himself, he kept moving forward and made sure to be mentally and physically ready for the 2021 season. (1/2)

Come back tomorrow to read the second part of the story!