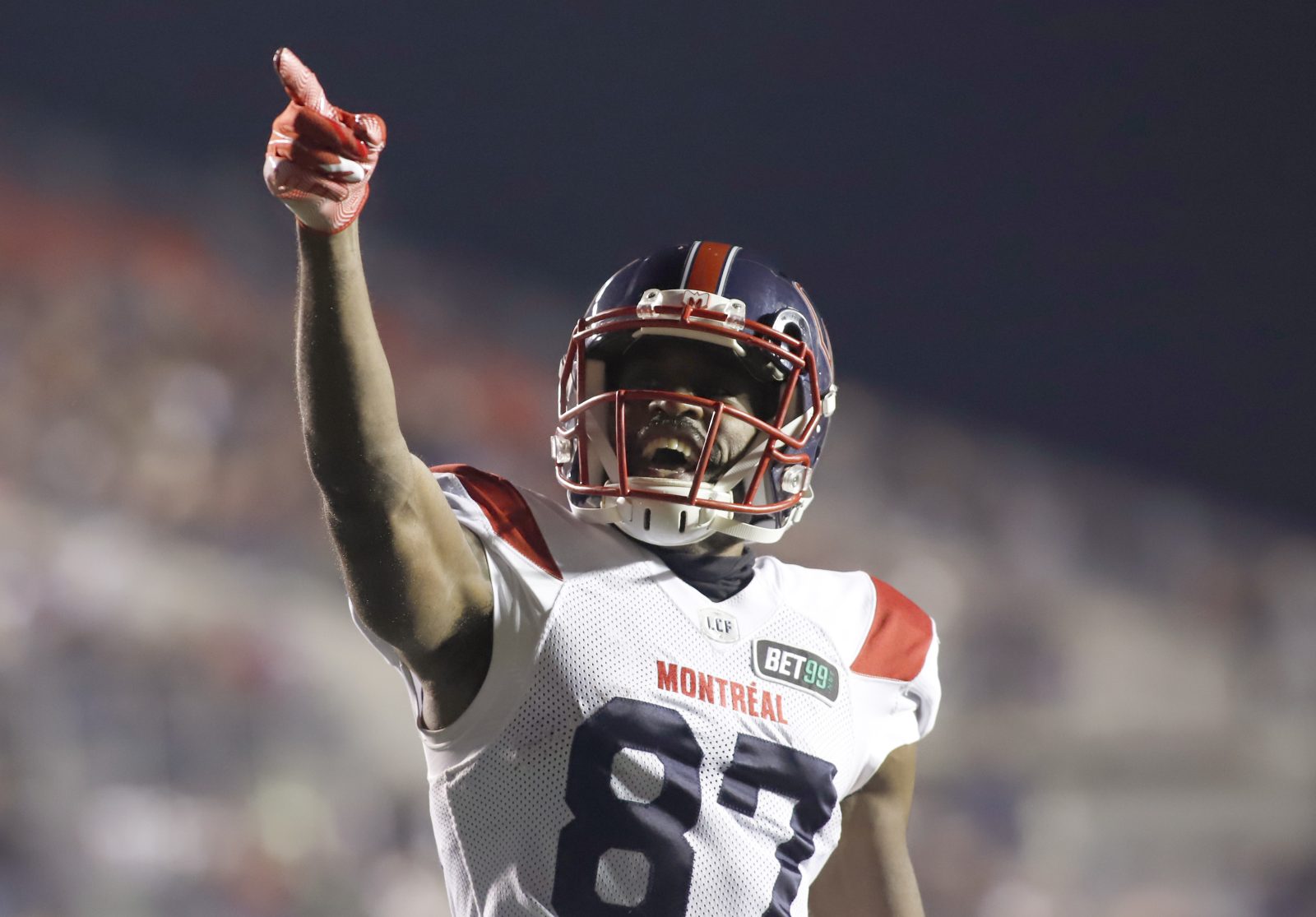 The Awards ceremony will be held at the Conexus Arts Centre in Regina tonight at 8pm ET. You can stream the event live on CFL.ca.

The Als only had one representative on the CFL All-Star team in 2022 and that was Lewis. The 29-year-old was third in the league in receiving yards, with 1303. He was also second in receptions, with 91, and he was one of four receivers to catch at least 10 touchdowns during the season. Lewis’ 144 targets were second in the league, as he was one target behind Ticats receiver Tim White.

Lewis’ impact wasn’t just felt on the field. Throughout the season, you got the sense that he was taking on more of a leadership role in the locker room, too.

He’s put together three excellent seasons in a row even though he’s had to play with several different quarterbacks. In 2019, he and Vernon Adams Jr. were on the same page, and it showed in their results. Last season, after Adams Jr. was injured, Lewis caught passes from Matthew Shiltz and Trevor Harris.

There was some stability at the quarterback position this year, as Harris started 15 games in a row for the Als, so he and Lewis were able to build a strong chemistry.

“I have worked really hard,” Lewis said earlier this week. “A lot of people don’t remember 2017 and 2018 when I was here. I wore number 73. If you weren’t here for those years, sometimes it gets lost in the background. They only see from 2019 until now… There’s been a lot that I have endured here. I’m not mad about any of it. I feel like everything that I’ve been through here has made me the player that I am, the person, and giving me the character to deal with adversity. I always told myself that I’m at my best when my back is against the wall.”

Lewis is going up against another great player in Collaros, who has helped lead the Blue Bombers to back-to-back Grey Cup titles. The 2021 Most Outstanding Player in the CFL is back in the Grey Cup with Winnipeg, and he could win the award again this year.

Collaros was second in the league in passing yards, but he dominated on the field in other areas. The 34-year-old threw 37 touchdown passes and just 13 interceptions in 2022. No other quarterback in the league had more than 25.

What makes this head-to-head matchup even more interesting is that both players were on the Alouettes roster to open the 2022 season.

Worthy put together a remarkable year. He was released by the Argos before the end of training camp, and he was scooped up by the Als almost immediately. The dynamic returner made several key plays throughout the season.

The Als led the CFL in big play returns (30+ yards on punt/missed field goal returns, 40+ yards on kickoff returns), with 13. The Roughriders were second in the league, with 10. Worthy’s six punt returns of 30+ yards are at least two more than anyone else in the CFL. His two kickoff return touchdowns put him tied with Alford for first.

We hope you had time to find your seat 😅@MTLAlouettes take the opening kickoff to the 🏠#CFLGameday pic.twitter.com/guzfgiM87A

“I’m getting the recognition, but what people don’t see is that we’re in there every morning at 7:30 or 8:00 as a group trying to figure out how we can beat this, trying to figure out the timing and trying to figure out all of those things,” Worthy said. “I just get the glory, but there are so many guys that put in so much work every day and putting their bodies on the line. They should be getting glorified the same way because we’re a unit. This unit is a great unit, not just me.”

Worthy also dominated in the East Division Semi-Final win over the Ticats, as he had two long returns (one punt, one kickoff) that put his time in prime position to score points.

Alford opened the year as the Als’ primary returner. He was injured during Week 1 against Calgary, and he was never able to get back into the lineup. On July 3rd, the Alouettes traded him to the Roughriders for a conditional sixth-round pick that turned into a fifth-round pick because he played more than nine games for his new team.

Nobody could have predicted that the Alouettes would be getting a rookie of the year finalist when they traded defensive lineman Cam Lawson and a second-round pick to Winnipeg for the ninth overall pick in the 2022 CFL Draft. But that’s exactly what happened.

The Als used the selection to take Philpot. If the draft had to be done over again, there’s a legitimate argument to be made that he’d be the number one pick.

The 22-year-old wasn’t used much on offence during the first part of the season, but that didn’t stop him more making big plays. He also stepped up in the return game when Alford and Worthy missed time due to injury.

Philpot finished the year with 39 receptions on 53 targets, he added 459 yards receiving and two touchdowns in 18 games.

The rookie was incredible during the East Division Final in Toronto last Sunday, as he led the team with eight receptions, 127 yards and one touchdown.

Don’t be surprised if he winds out being the best Canadian receiver in the CFL in the near future.

Unfortunately for Philpot, he’s going up against a player that had one of the great rookie seasons in CFL history. Schoen led the CFL in receiving yards (1441) and touchdown receptions (16). The 26-year-old had big shoes to fill after former Bomber Kenny Lawler signed a free-agent contract with Edmonton last winter.

“I’ve kind of thought about it,” Philpot said of his chances of winning the award. “Knowing that I’m going up against a receiver that beat me in every category and aspect of the game, I kind of assume he’s going to win, and I’d be okay with that for sure.

“I’m not really expecting to win, but it is what it is. It’s an honour to represent the East to begin with. Not a lot of guys get that opportunity, so I’m grateful to be there.”