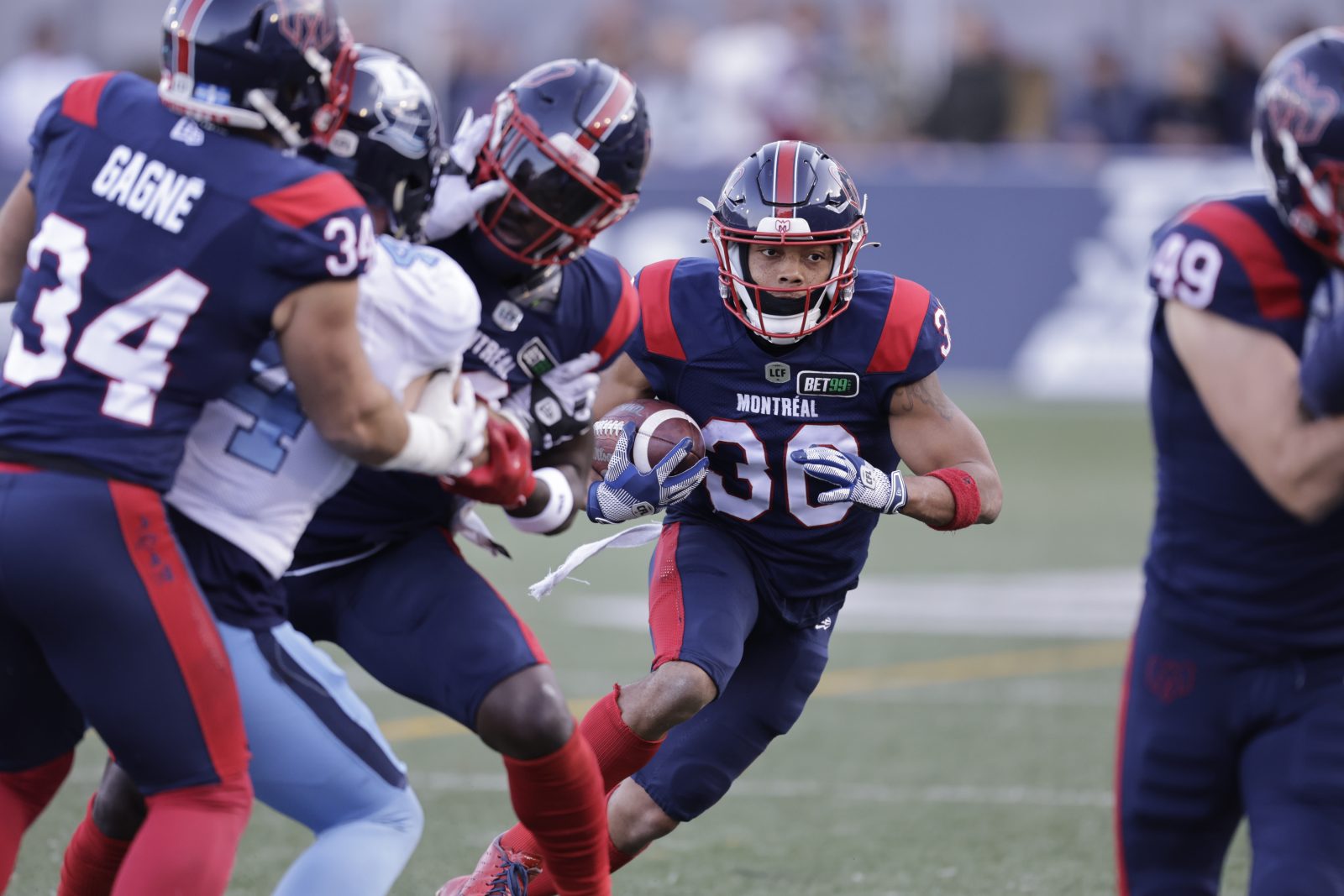 Unfortunately for the Alouettes, the battle for first place is officially over. Saturday’s 24-23 loss to the Toronto Argonauts ensured that the Als will be finishing second in the East Division.

This is the second time this season that the Als have lost to Toronto by just one point, as they also dropped a 20-19 decision to the Argos at BMO Field in Week 2.

The Alouettes will now host the Hamilton Tiger-Cats in the East Division semi-final on November 6th. The winner will take on the Argos in Toronto on November 13th.

The Als simply didn’t produce enough points when they got into the red zone. Give the Argos defence credit, they’d bend but they wouldn’t break. On the opening drive of the game, Montreal marched down the field all the way to the Argos 15-yard line when Trevor Harris was intercepted by Jonathan Jones.

The Als drove all the way down the field again in the opening quarter, only to be stuffed on third-and-goal from the one-yard line. Despite those two turnovers, the Als only found themselves down 7-3 at the halftime break.

Still, the team needs to find a way to execute in the scoring zone. That aspect of the game gets magnified when you lose by one point.

On a more positive note, there are a few solid performances on offence that need to be highlighted. Before we get into those individual efforts, it’s important to note that the Als moved the ball extremely well on Saturday afternoon. They finished with 519 yards of total offence, while the Argos had just 349. Harris was efficient, as he completed 75.8 percent of his passes for 413 yards, two touchdowns and one interception. Those are big numbers.

The other players I wanted to highlight are Geno Lewis, Walter Fletcher, and Jake Wieneke.

Lewis finished with six receptions on a team-high nine targets for 72 yards and one touchdown, but there are two catches that will stand out. First, he made an incredible catch on second-and-18 with the Als trailing by seven on their final offensive drive. He gained 14 yards. On third-and-four, he made an incredible diving reception in the end zone to tie the game. That’s what you expect from one of the elite receivers in the league. He’s been tremendous in 2022.

Fletcher continues to impress. He had a 59-yard reception in the first quarter, which got the Als into the red zone. He ended up with 99 yards receiving and 24 yards on the ground. He’s been so good that the Als will have to continue dressing two American running backs, which is rare for CFL teams.

And Wieneke came up with important catch after catch in this one. The veteran went over 100 yards for the first time this season. He finished the game with five receptions for a team-high 121 yards and one touchdown. It was nice to see Wieneke produce those kinds of numbers. Hopefully, he can keep rolling heading into the postseason.

Defence keeps the team in the game:

The defence did everything they could to keep the team in the game. As I mentioned before, even though the Als had two early turnovers in the red zone, they were still only trailing by four points at halftime. The defence allowed the offence to get into the rhythm of the game, and it worked because the score was tied at 23 with less than one minute to go in regulation.

“They threw a lot of short things at us in the first half, and they were able to get a hold of us that way,” defensive end Thomas Costigan said. “We were able to calm down and play some good defence in the second half. Our offence really turned things around.

Marc-Antoine Dequoy picked off McLeod Bethel-Thompson in the fourth quarter, which led to a David Cote field goal, which tied the game, 16-16. Dequoy, who is in his first year as a full-time starter, now leads the team in interceptions with four.

The last play of the game:

The special teams played well overall. Chandler Worthy gave the Als some good field position, but he was unlucky too. On two occasions, the Als returner let the ball go over his head because it looked like it would roll into the end zone. Unfortunately for him, the ball bounced the opposite way.

Finally, after the Als came back to tie the game for a second time, the Argos were able to march into field goal range. Kicker Boris Bede missed the field goal attempt, but Worthy couldn’t prevent the ball from going out of bounds, which means the Argos walked off with a win because they were awarded a single point on the play.

“There’s a lot to think about,” Worthy said after the game. “I kind of knew where I was on the field. I was trying to position myself so that I could stay in bounds, but I was literally like a toe out. Those moments are hard to swallow because I always want to give my heart and help my team win. It just gives me more fuel going into the playoffs to keep continuing to better ourselves. We still have such a good opportunity. That’s where my focus is.”

It’s a tough way to go down and a tough way to concede the division crown, but there isn’t much Worthy could have done there. There’s a lot going on in that moment, and even if he would have returned the ball out of the end zone, the Als were flagged for too many men on the field, so Bede would have been given another opportunity to win the game.

It was great to see S.J. Green in Montreal again. He’s clearly one of the greatest receivers in franchise history, and it awesome to hear Als fans give him the ovation he deserved. Green spent 10 seasons in Montreal. He won two Grey Cups, and he made countless spectacular grabs during his time here.

If you weren’t in the same stadium, you may have missed the Price family’s appearance at Percival Molson.

Canadiens goaltender Carey Price, his wife Angela, and their three children Liv, Millie and Lincoln were all in attendance for family day on Saturday afternoon!

______
Thank you to the Price family for coming to the game today!! pic.twitter.com/chhHxIDaaS

The Als will play one final regular season game against the Argos at BMO Field next Saturday at 2 pm, but it won’t have any bearing on the standings because the Toronto, Montreal and Hamilton are all locked into playoff spots.

“I’ve never been to the playoffs, so I’m super excited to get into playoffs,” Costigan said. “I know how much that means to everyone in the CFL, and I couldn’t be more excited to take that step.”

It’ll be interesting to see which veterans are rested by these two teams heading into their next matchup.