Alouettes put up 40 points in road win over Redblacks 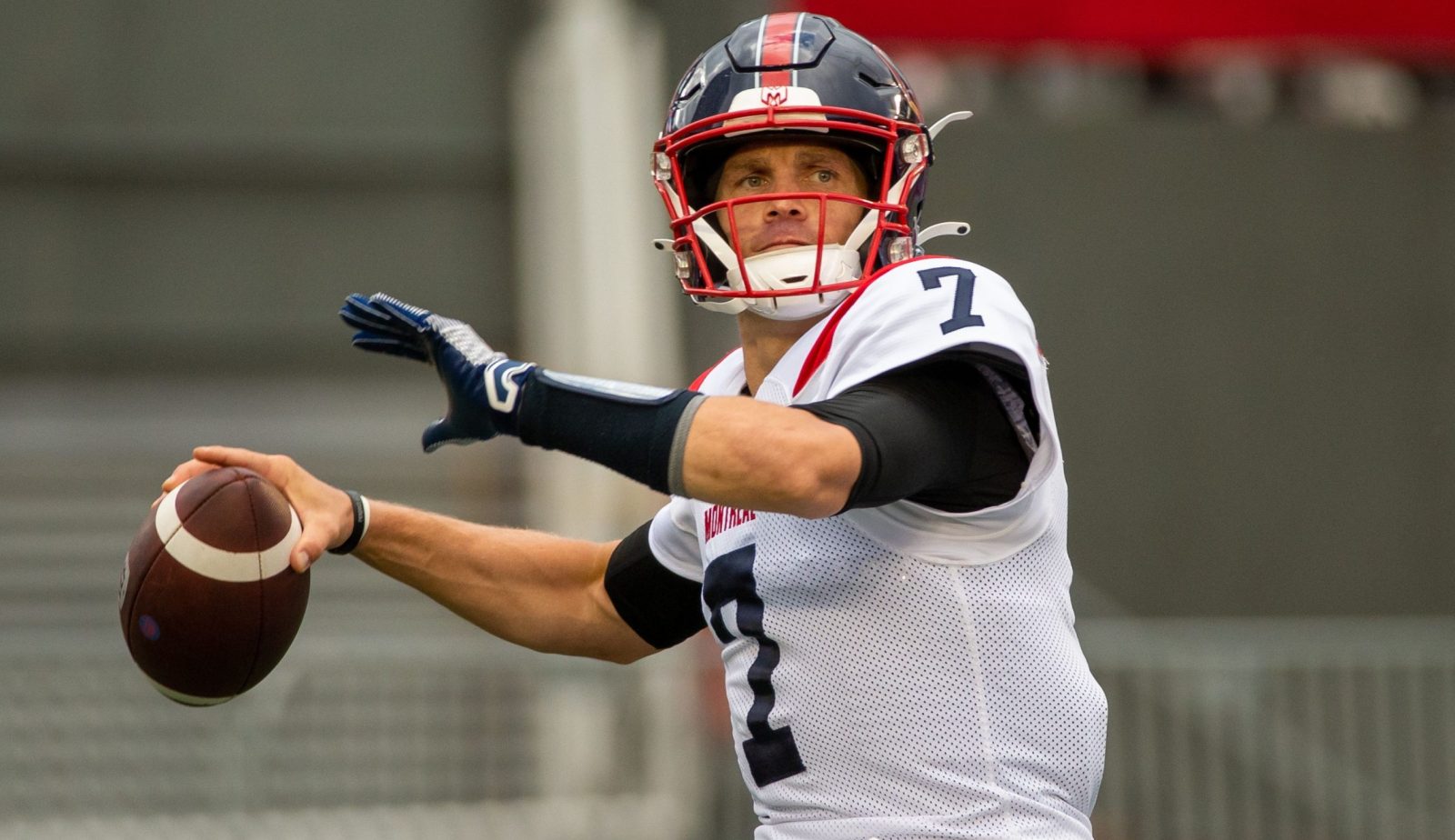 Alouettes put up 40 points in road win over Redblacks

That was a wild one!

The Alouetttes hung on for a big 40-33 win over the Redblacks at TD Place in Ottawa on Thursday night. They weren’t perfect, but they found a way to get the victory on the road, which isn’t easy in the CFL.

The Als fell behind 11-0 early in the first half, but they managed to explode for 18 points in the second quarter to jump out to a lead going into the break. Mistakes, including a safety and a turnover, got the Redblacks back into the game, but the Alouettes deserve credit for not throwing in the towel.

There were a lot of strong performances in this game and we’ll highlight them right here:

-Trevor Harris was on point:

I mentioned it above, the offence got off to a slow start in the first quarter. The wind had a lot to do with that, as the Als were driving into the wind in the opening 15 minutes.

Things clicked in a big way in the second though. Harris managed to connect with Hergy Mayala for a 69-yard gain and the momentum shifted in Montreal’s favour at that point.

The 36-year-old pivot was stellar in this game. He finished the night completing almost 81 percent of his passes for 341 yards, two touchdowns and no interceptions.

“I’m just glad we were able to get a win,” Harris said on the Als postgame show on Facebook Live. “It’s something we’ve been longing for. Last week, we let it get away and we had a couple more get away this year. Wins are not easy to come by in this league. We’ll savor this one tonight and get back to work tomorrow.”

This was a statement performance from the young Canadian receiver.

Mayala came up with a huge play that resulted in Dominique Davis’ first of three touchdowns on Thursday. He also finished off a drive by making a diving grab in the end zone to put the Alouettes ahead 14-11 at the time.

The 26-year-old had five receptions for a team-high 102 yards receiving tonight.

It’s hard not to feel good for Mayala. The Canadian receiver had 99 yards in his first five games with the Als in 2022, so this explosion was going to come at some point.

“I think we just took care of the ball,” Mayala said when asked what worked for the offence on Thursday night. “The biggest thing this week was literally to just involve everybody, take the plays that are there, make it happen, and Trevor did that. We were able to go out there and were able to show you guys a glimpse of what we got whenever we play.”

The Als have a few former Redblacks on their roster, including Harris, but a few players were making their first return to Ottawa since leaving last off-season.

“It felt great, especially getting the win,” Davis said after the game. “I couldn’t do it without my 0ffensive line. We got three more tries against (the Redblacks) and we’re going to try to keep on stacking up these wins.”

Have a night, Dominique Davis!

The 33-year-old now has an impressive seven rushing touchdowns through the first six games of the season.

Defensive end Avery Ellis, who signed with the Als in free agency, came up with five tackles and one quarterback sack on Thursday night.

And middle linebacker Micah Awe, who played with Ottawa in 2021, came up with a huge fumble recovery that he brought down inside the Redblacks five-yard line. Harris managed to find Lewis in the end zone two plays later to have the Als hit the 40-point mark.

Awe also had a huge tackle for a loss in the Ottawa backfield when he brought down speedy receiver Terry Williams.

Anthony Calvillo was crystal clear when he spoke to me this week. He told me that the Alouettes offensive game plan was going to be drawn up by all the offensive coaches. Calvillo is calling the plays on game day though.

They had been struggling in the red zone before the coaching change, but they’ve turned that part of their game around in the last two games.

Last week against Edmonton, they were 4-for-5 in the red zone. This week, they were 5-for-6 when they found themselves inside the Ottawa 20-yard line. That is a remarkable percentage. The only time they didn’t cash in in the red zone is when they fumbled at the Redblacks 19-yard line in the second half.

They probably won’t be able to continue cashing in at this rate, but it you have to give the entire offensive staff credit for getting that aspect of the game turned around this quickly.

The offence is clicking.

Before I move on to my final point, I just want to give a shoutout to Calvillo and Jeshrun Antwi. On second-and-medium, the Als called caught the Ottawa defence off guard when they handed the ball off to Antwi, who rumbled forward for a huge 55-yard gain. That was his second longest carry of the season (he had a 70-yard run in the 2022 opener in Calgary). It got them back into the red zone.

Another detail of this crazy game is that the Alouettes were perfect on two-point conversations on Thursday.

Harris hit Lewis right after Davis scored his first touchdown of the game. That cut Ottawa’s lead to 11-8 at that point. After another Davis touchdown gave the Als a 31-26 advantage, Harris threw a ball to Wieneke for another two-point convert to make it 33-26.

Over the last few seasons, it seems like teams are more willing to go for two after a touchdown (in both the CFL and NFL), so this was an encouraging sign for a Montreal team that hasn’t attempted many two-point converts so far in 2022.

The Alouettes will travel to Hamilton next Thursday to take on the Tiger-Cats at Tim Horton’s Field at 7:30 pm ET.