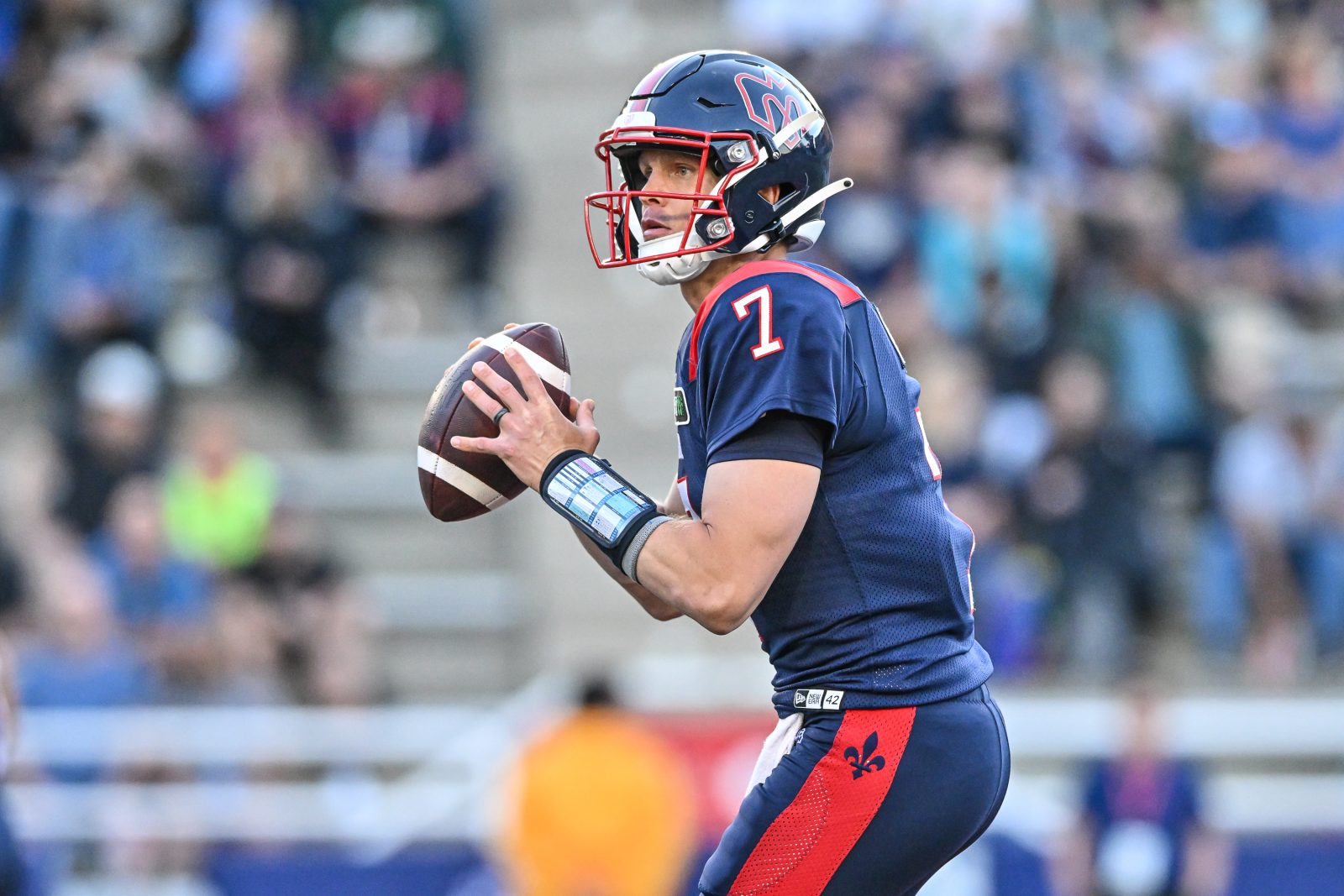 HARRIS, TREVOR #7 of the Montreal Alouettes

The Alouettes will head into Thursday’s home opener against the Saskatchewan Roughriders searching for their first win of the season. There will be some changes to the lineup that dropped the heartbreaker in Toronto.

Here’s what you need to know about the game:

Harris will make his first start of the 2022 regular season on Thursday night against the same team he made his Alouettes debut against last year.

The 36-year-old entered the game in relief of Vernon Adams Jr. in the second quarter at BMO Field last week. He managed to lead the Als on one touchdown drive (Dominique Davis scored on a quarterback sneak) and he drove them down the field a second time to late in the fourth quarter to set up a potential go-ahead field goal.

On that last drive, he made several important throws including one to Geno Lewis on third and 10 deep in Als territory.

Harris is calm and composed. He can get rid of the ball quickly, too, which might be important against the Riders’ ferocious front-four.

Adams Jr, who participated in practice on Sunday, missed the final two sessions of the week because of an illness. He will not dress for this game. Dominique Davis will be Harris’ backup, while Davis Alexander serves as the third-string quarterback.

With William Stanback on the six-game injured list, the Als turned to Jeshrun Antwi in Calgary and in Toronto. This week, it looks like the young Canadian will still get his share of the workload, but Walter Fletcher should be in the mix as well. Both running backs spent time with the first-team offence in practice this week, so expect to see them both.

Fletcher was acquired in a trade with the Edmonton Elks last week. The Als sent Edmonton a sixth-round selection in 2023 to acquire the 25-year-old tailback.

“(I bring) a little change of pace,” Fletcher said when describing his game.

“(I have) speed, I can catch the ball out of the backfield. That’s something I’ve always prided myself on in my career and, like I said, I’m that change of pace back.

“I think I’m a patient runner. I let the offensive line do their thing and let the holes develop. When there’s a seam or a gap, I just hit that gap. I have some explosiveness and I make big-yard plays just to keep the chains moving.”

During his rookie season in 2021, Fletcher finished with 302 yards rushing and 177 yards receiving in 11 games with the Elks.

On top Harris starting and Walter Fletcher being added to the lineup, there are a few more changes that will be made on offence.

The first change will take place on the offensive line. Left tackle Chris Schleuger will be coming out for Nick Callender, who was also with the Als last season.

“We’ve gotten a taste of Callender and we want to give him a shot out there,” head coach Khari Jones said after Tuesday’s practice.

Jake Wieneke, who was limited in practice on Sunday because of a hamstring injury, appears to be coming out of the lineup for Dante Absher.

Wieneke has been battling the injury since training camp, but it appears as though he’s close to being at full health based on his performance in practice.

“Jake looked like Jake this week,” said Harris. “When you come back from a hamstring injury, and he was pushing to come back early. He hadn’t really had a single practice until Week 1 and we were on a short week. Trusting that hamstring is a little bit different when you’re a receiver trying to plant off it and explode off it. It was going to take him a couple of weeks to get into shape and round into form and to trust that hamstring. They always say when you feel 100 percent on a hamstring after a tear or a pull, it needs one more week. He’s at that time now where he’s actually full-go.”

Absher has been with the Als since 2019. In five games last season, he finished with 90 yards on 10 receptions including 46 and 42-yard performances against B.C. and Ottawa. The 28-year-old has been productive whenever he’s been called into the starting lineup.

What a catch by Dante Absher! pic.twitter.com/YnEvRbyjBB

The Als will be missing one of their top Canadian players for this clash against the Riders, as Ackie did not participate in practice this week.

The 30-year-old injured his ankle late in last Thursday’s game against the Argonauts.

Suiting up in his spot will be fellow Canadian Brian Harelimana, who is entering his second year with the Alouettes.

The 26-year-old was drafted in the fourth round of the 2020 CFL Draft. He suited up in eight games as a rookie and made two defensive tackles and three special teams ones during that stretch.

Harelima saw quite a bit of action on defence against the Argos after middle linebacker Tre Watson was ejected in the second quarter.

The cerebral defender can play of playing in the middle, but he’s also comfortable at weakside linebacker, which is where he’ll be lining up on Thursday.

The Roughriders are off to a 2-0 start this season, as they’ve taken down the Hamilton Tiger-Cats and Edmonton Elks.

On offence, everything starts with quarterback Cody Fajardo. The 30-year-old has passed for 558 yards, two touchdowns and no interceptions through two games in 2022.

Running back Jamal Morrow was chosen as one of the three performers of the week in the CFL for his performance against the Elks on Saturday night. The 27-year-old rushed for 126 yards on 17 carries, and he added 28 more yards on four receptions.

The Rider defence has also stepped up in a big way. Through two contests, they’ve given up just 13 and 16 points.

Their defensive front has stood out for all the right reasons so far. Defensive tackle Garrett Marino is tough to handle inside, and defensive end A.C. Leonard brings the pressure off the edge.

“They’re just good,” head coach Khari Jones said of the Riders defence. “They do a lot of things with their linebackers, with their defensive line. They take guys off the ball. We have a pretty veteran offensive line, so I feel confident with it. But you’re going to have to get the ball out of your hands sometimes because they do a lot of different things up there.”