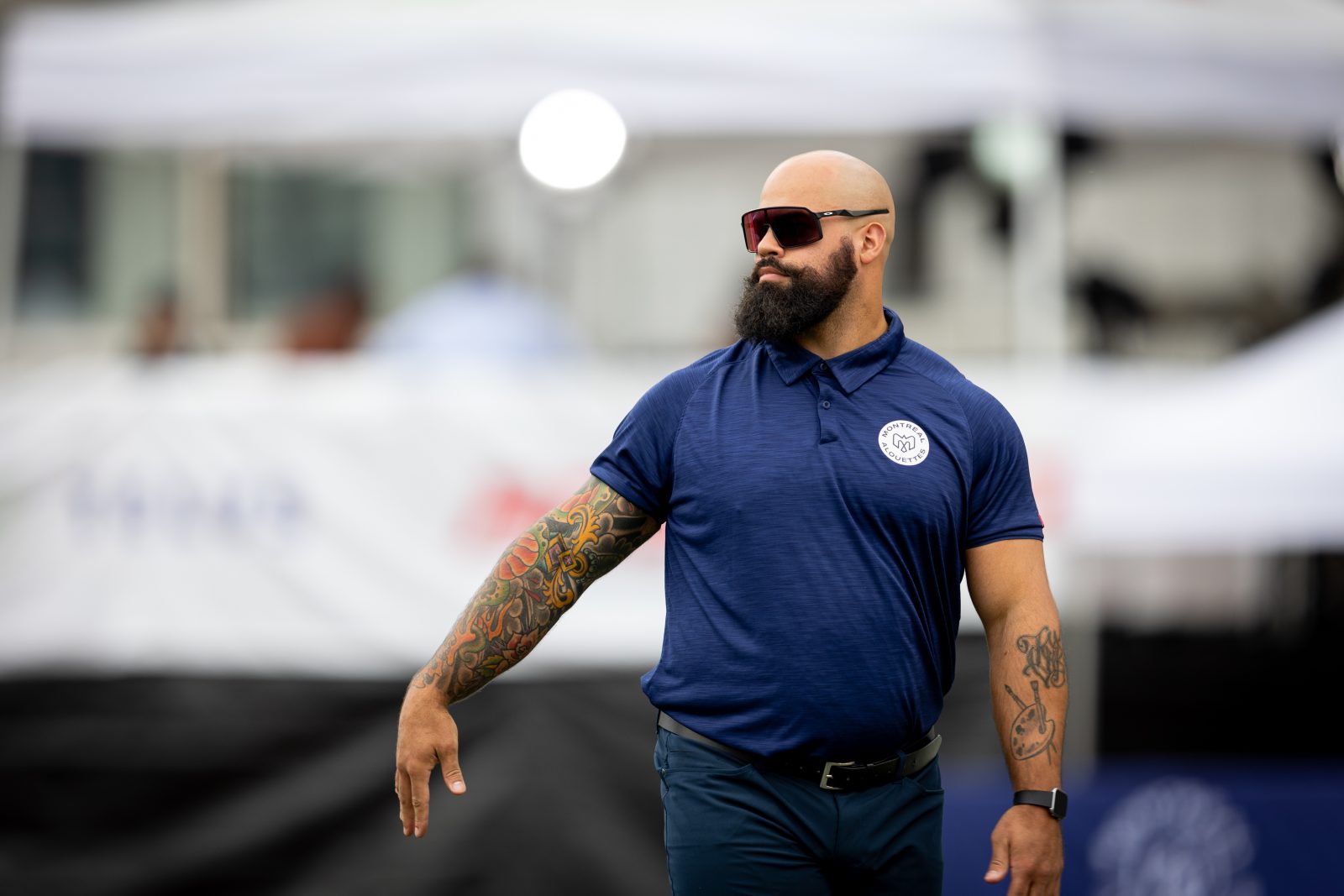 Denzel Washington has probably inspired thousands of young actors, but he also opened the door for at least one professional football career in the greater Montreal area.

When he was in elementary school, Alouettes special teams coordinator and linebackers coach Byron Archambault played hockey in Ville LaSalle. Every day on the way to practice, he used to walk by the LaSalle Warriors’ football field. He’d ask his mom if he could strap on the pads. The answer was always “no”. This went on for two years.

But one day, after a trip to the movie theatre, she finally gave in and allowed him to play.

“At one point, the movie ‘Remember the Titans’ came out, and her favourite actor is Denzel Washington,” Archambault said from his office inside Olympic Stadium. “He’s still my favourite actor to this day. He’s the reason I played football. Because of that movie, (my mom) understood what the value in playing football was. As soon as we stepped out of the theatre, after watching ‘Remember the Titans’, she said ‘okay, we’ll do it.’ That’s where it started.”

Archambault’s football journey got off to a tough start. He had to show he was committed to the sport very early on. When he signed up for the football team, he was told he was 18 pounds too heavy to play. To play at that weight, he would’ve had to suit up at the peewee level. He wasn’t ready for that. So, he had to find a way to drop the weight before the start of the football season, which was just three weeks away.

“We were going on vacation to Maine,” added Archambault. “I had three weeks to do it. The whole trip in Maine, for like a week, people were eating dessert, but they were hiding.

“I completely cut everything that could make me gain weight. I’d do laps in the pool. I was like 11 years old. My grandfather was there, and he kept pushing me to do one more lap, one more lap. I dropped 21 pounds in three weeks just to play football.”

The 31-year-old, who will replace Jeff Reinebold as the Als’ special teams coordinator in 2022, credits his mom for the success he’s had both on and off the field. Archambault’s father left the family when he and his sister were young, which meant that his mom, Lucie, did all of the heavy lifting when it came to parenting.

“She did a phenomenal job. We didn’t have much, but she didn’t say no to any sports. If it was sports related, it was an automatic ‘yes, but I better not catch you messing around after school’. A lot of my friends were hanging out after school and doing all that stuff. For three or four years, until the middle of high school, I was playing four different sports. I was playing baseball, football, hockey and some soccer.

“She just wanted to make sure I was doing as much as I could. When I got to high school, they had a hockey team there. So, I was two hockey teams, one football team, and then baseball in the summer. That was huge. Hockey is an expensive sport, but she never said ‘no’. I still have some of the equipment I had the first year (laughs).

“After school, you’d go from football practice to hockey practice right away, and she’d drive. She was constantly giving me lifts. I really owe everything to her.”

Als general manager Danny Maciocia and Archambault first crossed paths during the recruiting process, when the latter was attending Vanier College. Maciocia was trying to convince the talented linebacker to attend the University of Montreal ahead of the 2011 USports season.

“I saw these leadership qualities that he had,” Maciocia said. “When he spoke, he was able to garner people’s attention around him. I noticed the leadership in him by the way he handled himself, by the way he spoke, with his work ethic. We were trying to take over a program and rebuild it, and I said this guy would be a great get to set the foundation for the next few years. That was the case.”

Unfortunately for Maciocia, he didn’t land Archambault initially, as the Montrealer decided to leave home. He committed to Western University in London, Ontario.

But early on during his tenure at Western, someone broke into the family home. It was at that moment that he realized the importance of being close to his loved ones. One day into training camp, Archambault picked up the phone, called Maciocia, and asked if he was still interested in his services.

The rest is history.

Archambault had an outstanding career with the Carabins. Not only did he have personal success on the field, he also was a key cog in the team’s 2014 Vanier Cup title win over the McMaster Marauders at Percival Molson Stadium.

“It was a phenomenal decision,” Archambault said of joining the University of Montreal. “I played with a group of guys that were tremendous.

“Skill is nice, talent is nice, the roster is nice, but it’s really that locker room chemistry that gets you that trophy in the end. It really takes everybody. I definitely learned from that (experience).”

After his university career, he was selected by the Hamilton Tiger-Cats in the second round of the 2015 CFL Draft.

In the ninth game of his rookie season, Archambault suffered a non-contact injury, which ended up being a torn ACL.

He tried to battle back. There were complications with his knee during the rehab process, but he wasn’t willing to throw in the towel after just one season in the pros.

Archambault tried to make an impact on the field in his second year, but he found himself thinking like a coach and taking notes like a coach would. He got to learn from Reinebold, who was the Ticats special teams coordinator at the time.

“I realized that I loved the coaching side of it. I owe Jeff a lot because of that. At the end of that season, I knew I was ready to coach and ready to move on and contribute in a different way.”

Once he was ready to step away from the game as a player, Archambault was able to land a job with his old coach. Maciocia brought him in as the linebackers coach and special teams coordinator at the University of Montreal, which is the exact same role he’ll have with the Als in 2022.

“Coaching the special teams right off the bat at the University of Montreal was huge. I’ve always loved the special teams side of it when I was playing. A coach once said, ‘special teams are a window into your soul’. That resonated with me so much because it’s true. It’s almost entirely effort, will and desire.”

Once Maciocia took over as general manager in Jan. 2020, he brought Archambault into the fold as director of national scouting.

“When I got the job, I sat down and took a look at how I wanted to be structured, who I wanted to be surrounded myself with and who we can build with. Who can share the same vision I share? The first guy I asked was Byron.

“He’s got the gift to communicate. He’s so engaging. You want to sit down with him and talk football. He’s just a likeable, intelligent young man. I told him he could get on a run here.

“I would say, he would probably be one of the best moves I’ve made since I took the job here.”

So, Archambault started as the director of national scouting with the Als in 2020. He became director of player personnel in 2021, but he was also asked to join the coaching staff midway through the season after the team fired defensive line coach Todd Howard. Greg Quick stepped in as the defensive line coach and Archambault worked with the linebackers. The defensive unit took some positive steps after those changes were made.

Being a coach in the CFL is hard work and it involves long hours during the season, but once the Grey Cup is awarded things quiet down for most of them. Not Archambault, as he stills does a lot of heavy lifting when it comes to scouting. He attends open tryouts, watches American college and NFL film and he also runs the interviews with CFL draft prospects.

“He’s here 12 months per year, around the clock. We say 24/7, he’s 25/8,” Maciocia said of his new special teams coordinator. “He just eats it. He loves it. He’s so passionate about it. He went downstairs, took over the linebacking core, Greg Quick took over the defensive line, and we went from allowing 24.5 points per game to allowing 16.5 points.”

The hours invested in his craft aren’t lost on Archambault, but he’s able to plow forward because he loves what he does, and he has a supportive partner at home.

“I feel like I’m lucky to do what I do. I’m lucky to be with someone who understands that and who understands the love I have for this game and the commitment that comes with it,” Archambault said of his fiancée, Myriam Bonetti. “My fiancée has been tremendous with that because she’s holding down the fort. She has her career; she’s excelling in her career and we’re two career-oriented people. We encourage each other and we push each other to really be the best. That’s the support that really puts you over the top.

“Being able to share that with someone so special, I think that I, personally, owe a tremendous part of that to her and to her understanding. It’s not easy. I had three days off for Christmas and then that was it. You need someone special to be with you during those times.”

Being named special teams coordinator six days before the start of training camp will come with its challenges. Archambault didn’t have an entire offseason to plan, scheme and draw up his own special teams concepts.

The fact that he’s done it at the university level before will help, but he still has something to prove to the entire Canadian football world in 2022. He believes that being on the scouting side will help make his transition easier. He’s had to watch a lot of special teams tape. In other words, he’s not going into this blind.

It’s no secret that the Als struggled with penalties last year, particularly on special teams. So, what will his message be to the players?

“You have to take pride in it. You’re not just a linebacker, you’re not just a defensive back, or a receiver. That spot that you have on punt and punt return, that’s a starting job in the CFL. That’s how you have to play the game. We’re lucky because we have a bunch of guys on this squad that see it that way.”