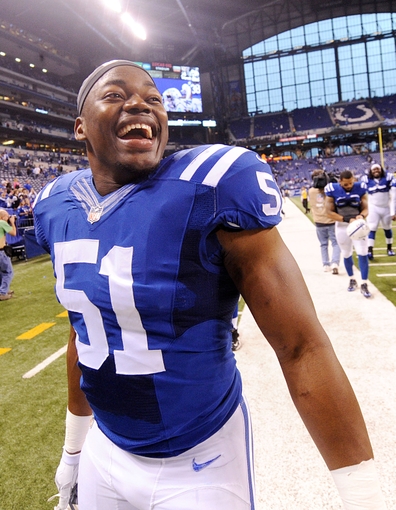 Montreal – The Montreal Alouettes announced on Wednesday that the club has signed national linebacker Henoc Muamba to a two-year deal.

Muamba (6’0″, 245 lbs.) most recently played for the Indianapolis Colts in 2014 where he recorded six tackles in thirteen games. He also participated in the team’s training camp this year.

Before playing South of the border, Muamba was selected first overall by the Winnipeg Blue Bombers in the 2011 CFL Canadian Draft. In three seasons with the Bombers, the 26-year-old amassed 171 defensive tackles, including four quarterback sacks all while making 53 special teams tackles and pilfering one pass. He also recovered a fumble which he returned 52 yards for a touchdown

He had his best season in 2013, when he collected 106 defensive tackles as well as 18 special teams tackles, which led to him being the Bombers most outstading player, defensive player and Canadian nominee. He was also voted to the CFL All-Star Team that season.

“We are pumped that Henoc has chosen to join our team. His intelligence, versatility and physicality are welcome in helping us down the stretch as we push for a playoff spot,” said Alouettes General Manager and Head Coach Jim Popp. “This isn’t just a signing of need at this time, this is a win-win situation for both Henoc and the Alouettes on and off the field in our community, now and in the future. We are equally excited about helping Henoc build his post-football career in the community and we are looking forward to him wanting to work in the Together at School with the Alouettes program with his new teammates.”

Originally from Kinshasa in the Democratic Republic of Congo, Muamba grew up in Montreal-North before his family moved to Ontario. He played his CIS football with the St. Francis Xavier University X-Men. He is the school’s all-time career leader in tackles (149.5) and ranks fourth overall on the Atlantic University Sport (AUS) conference’s all-time career list. Muamba was named the AUS Defensive Player of the Year in both 2008 and 2010 and was honoured with the President’s Trophy in 2010 for the top defensive player in Canadian Interuniversity Sport (CIS). He was a three-time CIS All-Canadian and AUS defensive all-star.

Muamba will meet up with his new teammates in Ottawa on Thursday, although he will not dress for the game.