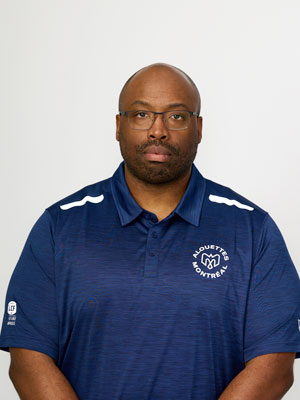 Jean-Marc Edmé is a three-time Grey Cup champion. He is entering his 16th season in the CFL and his ninth with the Montreal Alouettes. Edmé returned to the Alouettes in January 2022 as the Director of Pro Personnel. He spent the previous six years with the Ottawa Redblacks as the Interim Assistant General Manager and Director of Player Personnel.

Prior to joining the Redblacks, Edmé spent eight years with the Montreal Alouettes, where his duties included scouting collegiate (NCAA, CIS) players and CFL Draft-eligible. Edmé also evaluated players at the pro level (NFL, AFL, IFL), monitored NFL transactions and provided the coaching staff with advanced scouting reports on upcoming opponents. In addition to those duties during his five-year run with the Als, Edmé also served as a Defensive Assistant under former Alouettes Head Coach Marc Trestman.

Edmé’s CFL career began in 2007 when he served as a football operations intern with the Hamilton Tiger-Cats under then-GM Marcel Desjardins, who Edmé re-connected with in Ottawa. Midway through his internship, he was promoted to assistant coach. He assisted head coach Charlie Taaffe with daily operations.

The Montreal-North native holds an Honours bachelor’s degree in Sports Administration from Laurentian University. As a player, Edme wore the colours of the Vanier Cheetahs while playing in the Quebec Collegiate AAA League before earning a scholarship from Alcorn State University in Mississippi, where he played fullback. After two seasons, Edmé decided to return to Quebec to pursue his studies at the University of Sherbrooke and played for the Vert et Or following the team’s return to the CIS in 2003.