Do we still need to introduce Marv Levy?

An iconic head coach who was at the helm of our Alouettes in the 1970s and led them to two Grey Cups, who also made a name for himself south of the border by leading the Buffalo Bills to four consecutive Super Bowls. Elected to the Pro Football Hall of Fame in 2001, it is high time for him to get his name into the Canadian Football Hall of Fame.

Hence, by the beginning of April (date of the nomination of the 2021 Canadian Hall of Fame inductees), we will be posting different articles, content, and testimonials from former players and defining figures to push this nomination.

First post to share: this article of the Journal de Montréal columnist Marc Defoy who spoke to many of our former players about why Marv deserves his spot in the Hall of Fame. 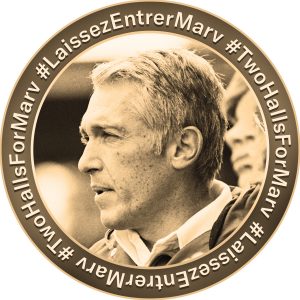 GET THE BADGE
Reasons Marv Levy deserves to be in both halls:
https://en.montrealalouettes.com/2021/03/19/marv-levy-deserves-halls/
The alumni rally up!
Peter Dalla Riva: Receiver for the Alouettes from 1968 to 1981

Marv’s technique helped improve the Canadian game. He’s the one who introduced the no-huddle offensive strategy which he later brought to the NFL. He challenged the norms for punt returns.

Johnny Rodgers: Receiver for the Alouettes from 1973 to 1976

Over his five years at the helm of the Alouettes, Marv led the team to three Grey Cup battles and won two of them. That’s hard to beat.

Gabriel Grégoire: Defensive lineman for the Alouettes from 1976 to 1980

He was such an inspiration to me personally, to the society, but also to all the coaches and athletes he worked with.

Marv Levy had a major impact in 5 years only, not only in Montreal, but in the entire Canadian Football League.

Warren Moon: “There are lots of reasons why Marv Levy should be inducted into both halls”

Bill Pollian: “Marv Levy should be in Canadian Football HOF

Hall-of-Fame Football Executive Bill Polian joined Melnick in the Afternoon to talk about Marv Levy, Tony Dungy and his time in Montreal.

The Alouettes blitz to get Marv Levy into the Canadian Football Hall of Fame. (The Suburban)

“What Marv did is astonishing” – Steve Christie

“What Marv did is astonishing” – Steve Christie

“Marv should already be in the CFHOH” – Al Burleson

“Marv Should already be in the CFHOF” – Al Burleson