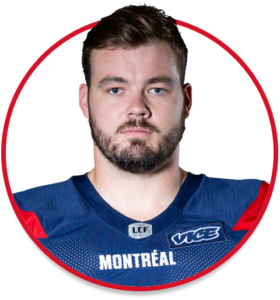 2018 : Was drafted by the Montreal Alouettes in the supplemental Draft on July 2.

After obtaining both citizenships, Canadian / American, Johnstone was drafted by the Alouettes on July 2 in the CFL Supplemental Draft. The Alouettes traded their first-round pick in order to acquire the offensive lineman. He played one game with the Montreal Alouettes.

After a career with the University of Oregon Ducks, Johnstone signed a contract with the Los Angeles Chargers as a free agent. He spent the season on the injured list and was released in April 2017.

Johnstone earned a major in General Social Sciences and in Psychology from the University of Oregon.

2018 : Drafted by the Alouettes on July 2 in the CFL Supplemental Draft.