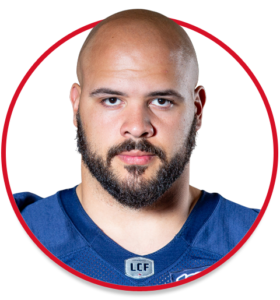 2018: Drafted second overall by the Alouettes at the CFL draft

Rutherford lands in Montreal after a remarkable four-year collegiate career suiting up for 44 regular season games with the Huskies, including ten as a true freshman in 2014. The versatile offensive lineman saw action at fullback, as well as both guard and tackle spots, but considers guard as his natural position. The Markham, ON native concluded his university career playing in the NFLPA Collegiate Bowl on Jan. 20 at the Rose Bowl in Pasadena, CA.