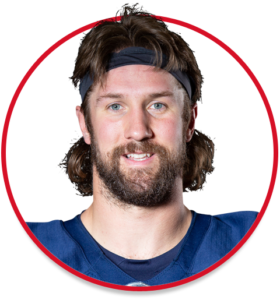 2018 : In 2018, Loffler played 16 games with Winnipeg earning 52 defensive tackles, two knockdowns, one fumble return for ten yards and three interceptions he returned for a total of 57 yards. In November, he became the ninth player in CFL history (the second Canadian) to be selected to the CFL All-Star Team three times in his first three seasons.
2017 : In 2017, Loffler played another great season with the Bombers. The Kelowna, BC native athlete played 17 games in which he collected 75 tackles, 3 on special teams, one interception and 3 forced fumbles.
2016 : In in first season with the team, Loffler was the Blue Bombers’ nominee for most outstanding rookie. In 17 games, he collected 58 tackles, 8 on special teams, one quarterback sack, 4 forced fumbles and 4 interceptions.

College :
Loffler played NCAA football for the Boise State Broncos from 2011 to 2014. He then transferred to the University of British Columbia and played with the UBC Thunderbirds in 2015.