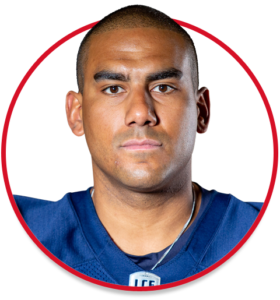 Spencer Moore has been a member of the Saskatchewan Roughriders since 2013. In 2019, he will be playing in his seventh season in the CFL. Drafted in the fifth round of the CFL (34th overall) by the Roughriders in 2013, Moore played 81 career games in the CFL, amassing 41 special teams tackles, while making 27 catches good for 227 yards. In 2018, the former McMaster University Marauder caught eight balls for 63 yards. The Hamilton, ON native also added seven special teams tackles. He won the Grey Cup in 2013 as well as the Vanier Cup in 2011.