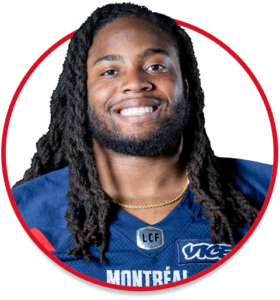 2019: The kickback specialist joined the Alouettes as a free agent in August 2019.

2018: Murray-Lawrence signed a contract with the Saskatchewan Roughriders with whom he played no games.

2015: After spending his college career with Tyler Apaches and Las Vegas until 2015 as a running back, Murray-Lawrence impressed many at the Canadian football league’s development camp that same year, enough to be drafted in the third round by the B.C. Lions. He played with the team in 2015 mainly as a kickoff returner, where he excelled after returning nearly 950 yards.