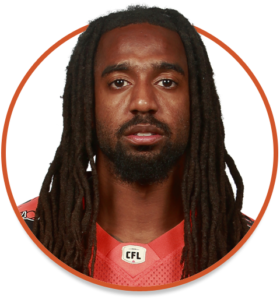 2018: Shakeir made his Lions’ debut on October 27 against the Saskatchewan Roughriders. The speedy receiver was used primarily on special teams, returning five kickoffs for 90 yards and three punts for 17 yards. Prior to joining the Lions, he made his CFL debut with the Hamilton Tiger-Cats on September 15 against the Calgary Stampeders and recorded seven kickoff returns for 218 yards, including a 104-yard return for a touchdown, as well as six punt returns for 22 yards.

2017: The Los Angeles Rams signed Shakeir as an undrafted free agent. He attended training camp with the Rams, appearing in four preseason games before being released during final cuts. He proceeded to sign on with the Washington Redskins.

College: Shakeir played 46 games with Northwestern State University through four years on campus. The speedy wide-out registered 140 receptions for 1,193 yards and eight touchdowns, and added 13 carries for 71 yards and one touchdown during his collegiate career with the Demons.