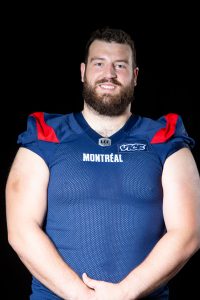 Thomassin was selected with a territorial pick at the end of the second round of the 2019 CFL Draft. The Rouge et Or offensive lineman returned to play a final collegiate season this fall and helped Université Laval reach the Dunsmore Cup after helping the team win the previous two Vanier Cup championships. The 24-year-old Quebec City, QC native was elected a first team All-Canadian these past two seasons, after being selected a second team All-Canadian in 2017. He was part of an offensive line that helped the Rouge et Or score a conference-leading 301 points in 2019, which was more than the double of the second place team in that category. The Laval offence also led the conference with 3,191 total yards. He also helped protect now Alouettes quarterback Hugo Richard, who completed 170 of his 236 passes for 2,185 yards and 18 touchdown passes in 2018.