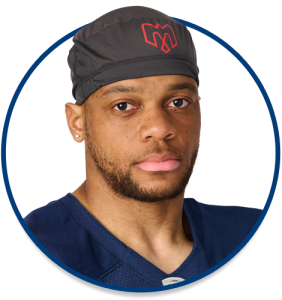 2022 : After changing positions back to wide receiver in 2022, he made his first career reception on June 16, 2022, against his former team, the Argonauts.

2019 : Upon making the active roster following 2019 training camp, he dressed in his first professional game on June 22, 2019 against the Hamilton Tiger-Cats as a back-up receiver. Following an injury to the team’s starting fullback, Declan Cross, Cibasu switched positions to fullback and started his first professional game on July 6, 2019 against the BC Lions. For the 2019 season, he played in 16 regular season games and recorded three special teams tackles.

2018 : He elected to return to university to complete his fifth and final year of eligibility.

Cibasu played U Sports football with the Montreal Carabins, originally joining the team in 2014 and playing wide receiver. He quickly established himself as a dominant force as he was named an RSEQ First Team All-Star and the RSEQ Rookie of the Year in 2014. He finished his stellar year with a Vanier Cup Most Valuable Player award after recording six receptions for 90 yards in a Carabins victory in the 50th Vanier Cup game in Montreal. He continued to have success over his five-year university career with the Carabins and finished as the program’s all-time leading receiver with 183 receptions for 2,231 receiving yards and nine touchdowns in 38 career games.