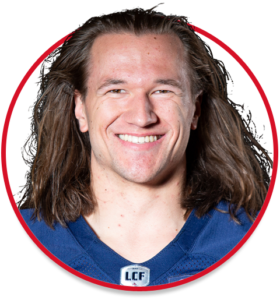 2018: Selected 46th overall by the Alouettes in the CFL draft

2018: in 13 games played in the 2018 season, Kozachuk collected 9 special teams tackles.
The London, ON native played four seasons with the Toronto Varsity Blues from 2014 to 2017. In his last college season, he finished second on the team with 53 tackles, as well as forcing two fumbles and recovering one.