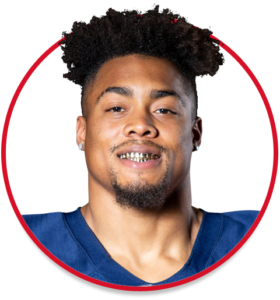 In his first year in the CFL, Levels played 12 games with the Calgary Stampeders including two starts and collected 15 defensive tackles, 4 special-teams tackles and 3 knockdowns. He also succeeded three kickoff returns for 44 yards. Levels dressed for both the Western Final and the Grey Cup, picking up a special-teams tackle in each game.

College :
Levels played 51 games over four seasons (2013-16) at Baylor. He recorded 90 total tackles including 14 tackles for loss and 6.5 sacks. He also had four forced fumbles and two pass breakups. During his senior season with the Bears, he returned six kickoffs for 127 yards.

Personal :
In 2014, he was part of a group of Baylor student-athletes who made a mission trip to Zambia. He was an all-state defensive back and also played wildcat quarterback and returned punts at Dallas’ Roosevelt High School.