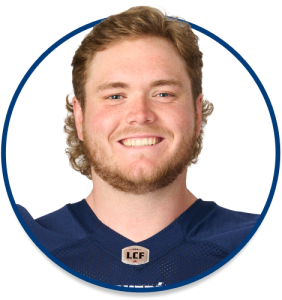 2021 : Played in 5 games in his first year with the Alouettes

Senior Year (2020): Played in the season opener vs. North Carolina (9/12), before suffering an injury that forced him to miss the remainder of the season.

Junior Year (2019): Reserve guard and offensive tackle … Member of the PAT/field-goal team … Played 84 snaps over nine games … Against Western Michigan (9/28), played five snaps at right tackle and delivered one knockdown block to help the Orange accumulate a season-best 545 total yards, including 258 yards on the ground … Had one knockdown in 19 snaps at right tackle versus Holy Cross (9/28) … Set career bests for both snaps (29) and knockdowns (3) while filling in at right guard at Florida State (10/26) … On the field for 15 snaps at right guard versus Wake Forest (11/30).

Sophomore Year (2018): Primary backup at right tackle … Played in seven games, mainly as one of the personal protectors on punt … Aided a Syracuse punt team that led the ACC in net average (39.1) for the second consecutive season … Played 39 offensive snaps … Saw the field for 14 snaps in the season opener at Western Michigan (8/31) … Assisted an offense that generated 560 total yards against the Broncos, including 334 yards rushing … Logged a season-high 19 snaps against Wagner (9/8) … Played six snaps versus Connecticut (9/22).

Freshman Year (2017): Second-string left guard … Played in eight games, mostly as a member of the PAT/field-goal unit and a personal protector on the punt team … Missed the last four games of the season due to injury … Contributed to an Orange punting operation that was No. 1 in the ACC (10th nationally) in net average (41.3) and led the conference (fourth nationally) in punt return yardage defense (2.67 avg.) … In his college debut, logged 24 offensive snaps against Central Connecticut State (9/1) and carded two knockdown blocks … Credited with two knockdown blocks in five snaps versus Central Michigan (9/16).