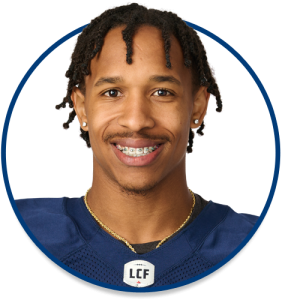 2018 : Signed as an undrafted free agent by the Giants

2019:  Jones appeared in seven regular-season games in his first year with the Bombers, starting the final contest before lining up at corner for the three playoff games. He had 10 tackles on defence and three more on special teams as well as a forced fumble and two tackles for losses during the regular season.
Jones was sensational in November, with a tackle, interception and pass knockdown in the Western Semi-final win over Calgary; five tackles in the Western Final victory over Saskatchewan and then four tackles, an interception and three pass knockdowns in the Grey Cup.

Jones played his senior season at Temple, after starting 35 of 38 games and accumulating 114 tackles, 36 pass breakups and 11 interceptions at North Carolina Central. During his one season at Temple, he recorded 44 tackles (36 solo), one interception and seven passes defensed, while starting every game at corner.  Jones was signed as undrafted free agent by the New York Giants in 2018.