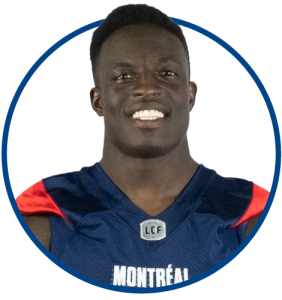 2021 : Signed a one-year contract with the Ottawa Redblacks on February 12

2020 : Signed a two-year contract with the Winnipeg Blue Bombers on February 18

2019 : Signed a one-year contract with the Toronto Argonauts on February 13

2016 : Signed with the Tampa Bay Buccaneers practice squad on September 5

2016 : Signed with the Tampa Bay Buccaneers in May

2021: Micah landed with the Ottawa REDBLACKS and appeared in all 14 games while registering 74 defensive tackles, three sacks (both career-highs) and a pair of forced fumbles.

2020: signed with the Winnipeg Blue Bombers early in free agency but would not suit up for the club after the season was cancelled due to COVID-19.

2019: joined the Toronto Argonauts as a free agent and registered 44 defensive tackles, an interception, one sack and a forced fumble in ten contests.

2017-18: Micah originally joined the Lions ahead of 2017 training camp and emerged as one of the more productive newcomers, earning a spot in the starting defence.  As a rookie, he would finish third on the team with 54 defensive tackles while the punishing defender added 16 more tackles on special teams.

He was then released by the Lions to sign with the New York Jets but would be waived by the team in late April. Returned to the Lions in August and recorded 31 defensive stops and three more on special teams in seven games.

2016: Micah signed with the Tampa Bay Buccaneers as a non-drafted free agent and would be released from the practice roster in mid-December.