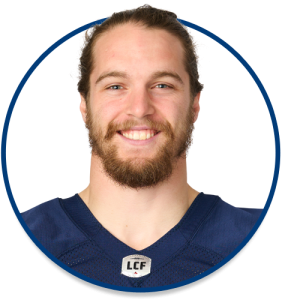 2020 : Signed with the Green Bay Packers as an undrafted free-agent on April 26

2021 : He played in his first professional game on August 14 against the Edmonton Elks. He played in eight regular games during the 2021 season where he had one defensive tackle and eight special teams tackles.

Dequoy enrolled at the University of Montreal and moved up the depth chart on the Carabins football team in 2016. He mainly played on special teams and had 9.5 tackles while appearing in five games. In 2017, Dequoy was a Quebec conference (RSEQ) all-star and a second-team all-star in U Sports after contributing 29.5 tackles and three interceptions in addition to one tackle for loss and four pass breakups in seven games. He was named RSEQ defensive player of the year in 2018.

Dequoy was a USports first-team all-Canadian in 2019 after leading the team with 37.5 tackles and three interceptions in eight games. He returned an interception 85 yards for a touchdown versus Laval in the Dunsmore Cup. During the 55th Vanier Cup championship loss against Calgary in November 2019, he suffered a broken right forearm during a tackle. Dequoy was invited to the East–West Shrine Bowl but could not participate due to the injury. During his pro day, Dequoy ran a 4.35-second time in the 40-yard dash, the second-fastest for cornerbacks behind Javelin Guidry, despite suffering from the flu.