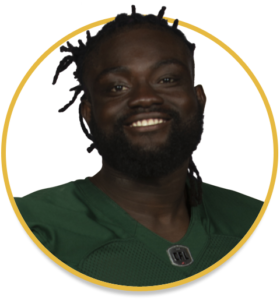 (Edmonton) After starting the season on the practice roster, Asare was activated for a Week 9 game against Ottawa and made his professional debut. He appeared in a total of five games during the season.

(Edmonton) For a second consecutive year, Asare was on Edmonton’s practice roster for the season.

Asare played five seasons (2012-16) at Carleton. He helped the Ravens finish third in U Sports with 1,773 rushing yards in his senior season as running back Jayde Rowe led the country with 136.8 yards per game. Asare was named the Ravens’ outstanding lineman of the year in 2013 and 2014.

Asare played in the East-West Bowl in 2016 and participated in an NFL regional combine in 2017. He majored in communication and media studies at Carleton.