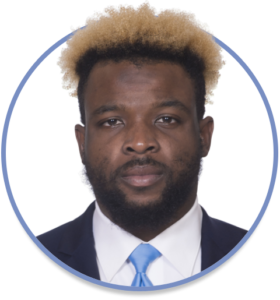 Played seven games with the Toronto Argonauts and earned 24 tackles, one interception and forced a fumble,

In 16 games with the Winnipeg Blue Bombers, he realized 46 defensive tackles, added four interceptions and forced three fumbles. He returned a missed field goal for a 110-yard touchdown against the Eskimos. On 80 punt returns he amassed 730 yards for a 8.1 average per run.

In 15 games with the Blue Bombers, he made 29 tackles, two interceptions and forced one fumble. On 67 punt returns he amassed 775 yards for a 11.6 average per run.

He was dressed for all games with the Blue Bombers and made 79 defensive tackles, four interceptions and forced two fumbles. On 53 punt returns he amassed 754 yards for a 14.7 average per run.

Fogg was voted on the All-Big South Conference Team in his last year with the Flames. He was credited of four interceptions, including one that resulted in a touchdown. He also added seven knockdowns and 44 tackles. As the team returner, he maintained an 8.5 average on punt returns and an 18.9 average on kickoffs.

Was part of the Miami Dolphins’ practice team.

Was part of the Pittsburgh Steelers’ practice team.

As an assistant football coach, he led the St. Paul’s High School Crusaders to the AAA football championship.