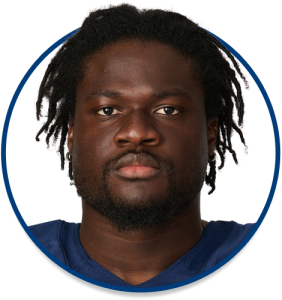 2022 : Signed a two-year contract extension with the Alouettes on January 31

2019 : Drafted in the sixth round, 48th overall, by the Montreal Alouettes

2021: In his first season, Antwi made an appearance in all 14 regular season games garnering 36 rush attempts and 6 receptions.

2019 : Antwi attended Alouettes pre-season but decided to return to university to play his final season in Calgary.

Antwi played for the University of Calgary Dinos from 2015 to 2019. His career was highlited by a Hardy Cup win in 2016 and two Vanier Cup appearances. He had a big performance in the first one rushing for 177 yards on 25 carries, however his team lost. He was forced to miss the second appearance with an injury, however, the Dinos won and Antwi finished his university career as a champion.