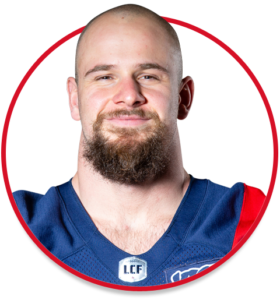 2018 : Drafted by the Alouettes in third round, 23rd overall, at the CFL draft

Poulin played for the Western University Mustangs from 2014 to 2018. The Saint-Nicolas, QC native was named an OUA All-Star two years in a row and earned a first-team all-Canadian selection. In his last year with the Mustangs, Poulin won the Vanier Cup against the Université Laval Rouge et Or. Drafted by the Alouettes in 2018, he played 17 games and collected 3 special teams tackles.