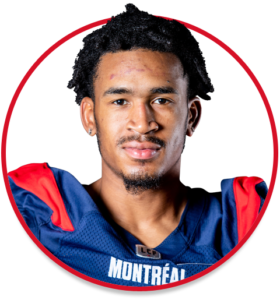 In 17 games with the Montreal Alouettes, he made 23 defensive tackles and 11 on special teams.

Jarnor Jones was part of the Atlanta Falcons’ organization.

Jones played in 24 games over two seasons at Iowa State. He totaled 78 defensive tackles (45 solos) with one interception, 9.5 tackles for losses, and 11 knockdowns for the Cyclones.

Jones spent one season at Georgia Military College – after transferring from N.C. State – where he logged 40 tackles, five tackles for loss, eight knockdowns, and two interceptions.

Jones has a major in communications from Iowa University.

In 2016 was invited to the College Gridiron Showcase and to the Tropical Bowl.