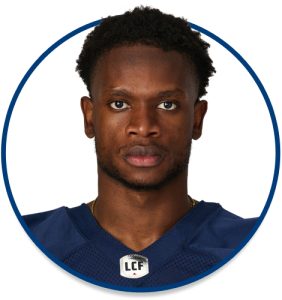 (Calgary) Mayala was under contract with the Stampeders but the season was cancelled because of the global pandemic.

(Calgary) Mayala played 16 games and made six starts during his rookie season with the Stampeders, finishing with 38 catches for 562 yards and five touchdowns. After limited action in his first two games and sitting out the next two contests with an injury, he made his first CFL reception in a Week 6 contest against Toronto. Mayala made his first start the following week in Ottawa and had a pair of catches. He finished the season strong, making 27 receptions for 442 yards and five majors including two-touchdown games against Saskatchewan in Week 18 and against Winnipeg in Week 20. Mayala had a pair of 100-yard games. He was a starter in the Western Semi-Final and had one catch for nine yards.

The Montreal native played four seasons at the University of Connecticut and in 43 games for the Huskies he had 113 catches for 1,352 yards and 12 touchdowns. In 2017, he led UConn with 43 receptions for 615 yards and seven scores including three 100-yard games. As a senior in 2018, Mayala had 40 catches for 361 yards and five touchdowns.

Mayala played receiver as well as defensive back at New York’s Trinity-Pawling School, which also produced Stamps offensive lineman Derek Dennis. He was a communications major at Connecticut.