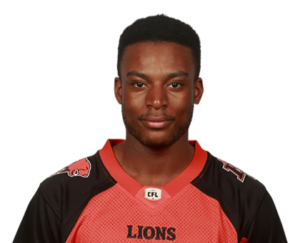 2018: Termansen’s first season as a Lion was a successful one. The North Vancouver native appeared in just four contests for BC, but had one defensive tackle and two special teams tackles on the season. Dominique made his CFL postseason debut on November 11 in the East Division Semi-Final against the Hamilton Tiger-Cats.
2017: Termansen played eight games for the Montreal Alouettes in 2017. He racked up three defensive tackles and added one special teams tackle.
2016: Dominique signed as a free agent with the Alouettes and appeared in all 18 regular season games. The rookie defensive back tallied one defensive tackle, four special teams stops, forced one fumble and intercepted one pass.

College:
Dominique recorded 86 tackles, nine pass breakups and four interceptions across 27 games at UBC. Termansen’s best season as an amateur came in 2013 when he registered 32 tackles, broke up four passes and intercepted a pair of passes through eight games. He was part of the Thunderbird squad that won the Hardy Cup (Canada West championship), the Uteck Bowl and the Vanier Cup in 2015.