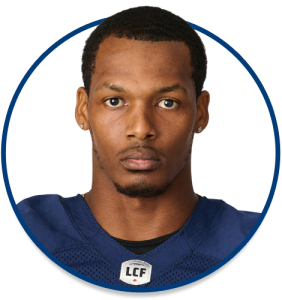 2021 : Signed a one-year contract extension with the Redblacks on January 7

2017 : Signed a contract extension with the Blue Bombers on January 4

2014 : Signed with the Indianapolis Colts on September 9

2014 : Signed with the Atlanta Falcons as an undrafted free agent

2021 : Davis opened the 2021 season as the backup to veteran Matt Nichols, however the Redblacks offense started slow to begin the season and by Week 5 Davis came on partway through the match in an attempt to revitalize the passing attack. Davis was named the starting quarterback for the teams Week 6 match against the BC Lions. Davis started the next two games for the Redblacks, losing both matches by a combined score of 69-20, and in the second game was benched in the third quarter against the Tiger-Cats in favour of Matt Nichols. He finished the season having played in six games completing 59 of 98 passing attempts for 674 yards with three touchdowns and four interceptions.

2019 : Davis was named the starter to begin the year until he got hurt and eventually benched following his return from injury

2018 : As a backup and short yardage rusher, Davis scored for the first time in his professional career; he completed 24 of 39 passes for 373 yards and 3 touchdowns against one interception, while producing 40 rushes for 73 yards and 6 touchdowns. He also started the final regular season game of the year against the Toronto Argonauts.

Boston College
After sitting out the 2007 season with Matt Ryan leading the Boston College Eagles, in his second season he and Chris Crane vied for the position of quarterback early on in the 2008 season. Dominique got his first snaps in a game against University of Central Florida following a poor showing by Crane. He also played in the following game against University of Rhode Island, but then was benched by head coach Jeff Jagodzinski as Crane solidified his position.

Then in week 13 against Wake Forest Chris Crane went down in the second quarter and Dominique Davis came in with a 13–0 lead. Davis played mediocre, fumbling twice as the Boston College defense kept the game close until the final minutes of the game. Then with less than 4 minutes left Davis completed a long 3rd down to WR Rich Gunnell to put BC into scoring range. Following a pass to WR Brandon Robinson, Davis capped the drive with a short run for the winning score. His first victory as a starter came on November 28, 2008. The 28–21 victory over the Maryland Terrapins clinched BC’s spot in the 2008 ACC Championship Game.

Two weeks later, in a rematch, Davis’ FSCC team defeated Butler, 13–12, to give the Greyhounds their first-ever Region VI Playoff championship. The Greyhounds were given the No. 1 ranking in the national poll and were matched up against No. 2 Blinn College (Texas) for the National Junior College Athletic Association national championship in the Citizens Bank Bowl on the campus of Pittsburg State University. Blinn rallied from a 26–10 deficit in the second half to win the game 31–26 on an 84-yard punt return with 15 seconds remaining. Fort Scott’s 11–1 final record was still its best since going undefeated (11–0) to win the 1970 national championship.

East Carolina University
Davis transferred to East Carolina University for the 2010 season. In his first start with the Pirates, Davis completed 27 of 46 passes for 383 yards with 5 touchdowns and 1 interception. He also rushed for 29 yards with 1 TD. With five seconds remaining in regulation, Davis threw a 33-yard Hail Mary pass to Justin Jones in a 51–49 win over Tulsa. Davis went on to pass for 3,967 yard and account for the third most touchdown passes (37) by a quarterback in the Football Bowl Subdivision and led the Pirates to a 6–7 record and a berth in the 2010 Military Bowl, losing 51–20.

For the 2011 season Davis was named to the Manning Award, Maxwell Award, and Davey O’Brien Award watch lists. On October 22, 2011 the East Carolina quarterback did not throw an incomplete pass in the first half of the Pirates 38–35 victory over the Navy Midshipmen. This gave Davis the NCAA record for most consecutive completions in one game held by Tee Martin of Tennessee in 1998. Combining the 10 consecutive completions from the ECU’s previous game against Memphis, his 36 consecutive passes over two games eclipsed the previous overall consecutive completion record of 26 held by Aaron Rodgers of Cal in 2004. This performance led Dominique to be selected by ESPN analysts as one of four finalists in the AT&T All-America Player of the Week for week 6 of the 2011 season.

Davis is East Carolina’s career leader in passing touchdowns. He is fifth on the school’s all-time passing yards list.