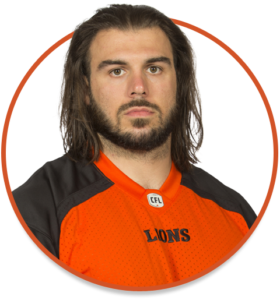 2020: Acquired by the Alouettes as a free agent on February 12

He registered 18 quarterback sacks and 55 defensive tackles in 94 career-games with the British Columbia Lions. The 29-year-old Chicoutimi native also intercepted three passes, while knocking down another three. The former Université de Montréal Carabin also forced three fumbles during his career. Drafted in the fourth round (32nd overall) in 2014, he made 12 defensive tackles and two sacks in ten games last season.