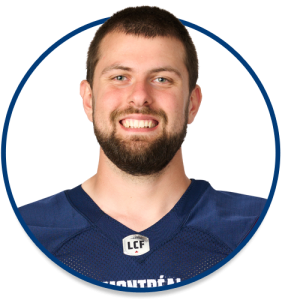 2021 : He beat fellow kickers Tyler Crapigna and Félix Ménard-Brière during training camp to win the job as the team’s placekicker to open the season. He played in his first professional game on August 14, 2021 against the Edmonton Elks where he was successful on three of his four field goal attempts

Côté played U Sports football for the Laval Rouge et Or from 2017 to 2019. He was named a U Sports Second-team All-Canadian in 2018 after connecting on 19 of 23 field goal attempts and being successful on all 26 of his point-after-touchdown converts. He finished that season as a Vanier Cup champion after the Rouge et Or completed an undefeated season and were victorious over the Western Mustangs in the 54th Vanier Cup. In that game, Côté was successful on both field goal attempts and all four convert tries. He did not play in 2020 due to the cancellation of the 2020 U Sports football season and remained draft-eligible for the Canadian Football League in 2021.