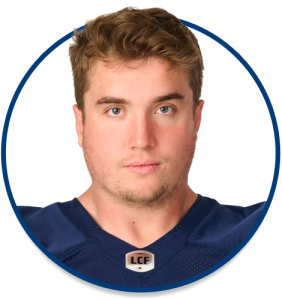 2021 : Signed a contract extension with the Alouettes on December 17

2018 : Drafted in the fourth round, 28th overall, by the Calgary Stampeders

2021: Following training camp, he made the team’s active roster as a backup. He started his first game on October 11, 2021, in the Thanksgiving Day Classic against the Ottawa Redblacks. Brown played in 10 regular season games, starting in three, before being placed on the injured list for the final four games of 2021. He returned for the East Semi-Final playoff game, but the Alouettes lost to the Hamilton Tiger-Cats.

2019:  Brown began the year on the practice roster, but dressed in his first professional game on July 18, 2019, against the Toronto Argonauts. He dressed for five regular season games in 2019.

2018 : He attended training camp with the team in 2018 but did not participate in the preseason due to a previous injury. Brown was then released so that he could complete his final year of U Sports eligibility.