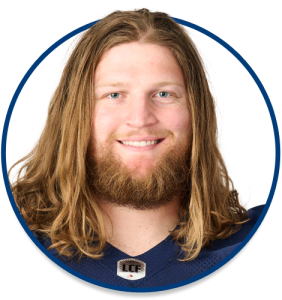 2022 : Signed a one-year contract extension with the Alouettes on February 7

2018 : Signed with the Roughriders practice squad on September 26

2018 : Signed with Birmingham of the AAF

2018 : Signed with the Steelers as an undrafted free agent on April 28

Schleuger transferred to Northern Iowa in 2015 where he played 14 games, including eight starts, at left tackle. But that was a Division I-AA school, and he was savvy enough to realize there would be little exposure for him there. He required an FBS Division I-A program.

In 2016, he made the bold move of transferring to the University of Alabama-Birmingham, a program that discontinued its football team in 2014 due to financial reasons but one, Schleuger was advised, that would soon be reborn.

The school raised US$48-million to revitalize the team while the players spent that season training. As a senior in 2017, Schleuger started 12 games at left guard and was named to the second all-Conference USA all-star team. The Blazers went 8-5 and were invited to the Bahamas Bowl.