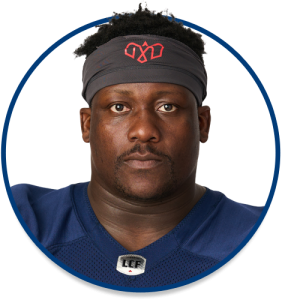 2015 : Signed an extension with the Eskimos on December 22

2013 : Signed an extension with the Eskimos on December 19

2012 : Signed with the Gladiators of the AFL

2021 : He played in all 14 regular season games where he had 19 defensive tackles and five sacks

2013-2020 :Through his nine years with Edmonton, Sewell amassed 282 tackles and 60 sacks in 139 regular season games, and was named a CFL All-Star six times, and divisional All-Star seven times

2012 : Spent part of the season in the AFL before signing with the Eskimos

2011 : He started the season on the reserve list and appeared in three games before being released

He played college football at the University of Akron and attended Hargrave Military Academy before transferring to Trenton Central High School in Trenton, New Jersey.