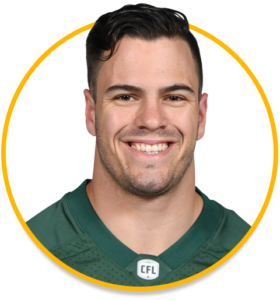 2018: Dupuis has appeared in all eight games and has caught one pass for 12 yards and also has one defensive tackle. Dupuis finished the season on the club’s six-game injured list.

2017: After 16 games, Dupuis has three receptions for 30 yards and four special teams tackles. Dupuis appeared in the West Semi-Final.

2016: (Toronto)Played in 17 games with the Argonauts where he recorded 10 receptions for 72 yards.

2014: (Toronto) Selected in the fourth round of the CFL Draft.