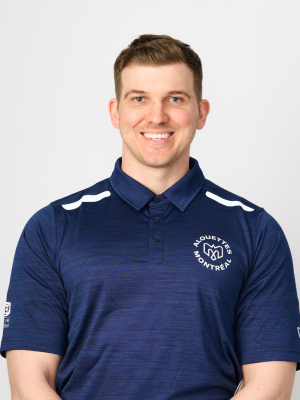 Pier-Yves Lavergne was named Director of National Scouting by Montreal Alouettes General Manager Danny Maciocia on January 5th, 2022. His first task was to build a successful foundation when it came to the Canadian College Draft. He is also involved in the strategic decisions regarding player acquisitions & player evaluation at the pro & college levels. He also oversees the salary cap and is involved in the negotiation of player contracts.

Before embarking on his CFL journey, Lavergne played for the University of Ottawa Gee-Gees from 2010 to 2012 while earning a degree in Communications with a minor in Administration. He then transferred to the University of Montreal Carabins for the 2013 and 2014 seasons while completing his Masters’ degree in Management. During the 2015 season, he worked for the University of Montreal’s Athletic department and served as a Defensive & Special teams assistant coach for the Carabins. He was part of the 2014 & 2015 teams that participated in the Vanier Cup, winning it in 2014.

Lavergne was born on November 29th, 1989 in Gatineau, Quebec and grew up playing his high school & Cegep football in Outaouais.