The CFL unveiled their schedule for the upcoming 2023 season. The Alouettes will begin their regular season schedule on Saturday, June 10th at Percival Molson Stadium.

You can check out the full schedule by clicking here.

The rivalry between the Alouettes and Redblacks will heat up this year, as Ottawa hired former Montreal coaches Khari Jones and Barron Miles this off-season. The two teams split the four games they played last year, as Montreal won both games in Ottawa while the Redblacks were victorious in both games at Molson Stadium.

The Als will then have a bye in week 2 before playing their first road game of 2023 in Hamilton on Friday, June 23rd.

The first meeting between the Als and the Grey Cup Champion Toronto Argonauts will take place in Montreal on Friday, July 24th.

There are a few challenging portions of the schedule that need to be highlighted. First, the fact that the team has two bye weeks in the first seven weeks of the season is great but playing from Week 8 through Week 19 without a week off is going to be challenging.

Secondly, there are a couple of quick turnarounds that the players will have to battle through this season. For example, they’ll be in Vancouver on Sunday, July 9th and they’ll need to host the Argonauts on the following Friday. That’s a long flight and a short amount of time to recover. 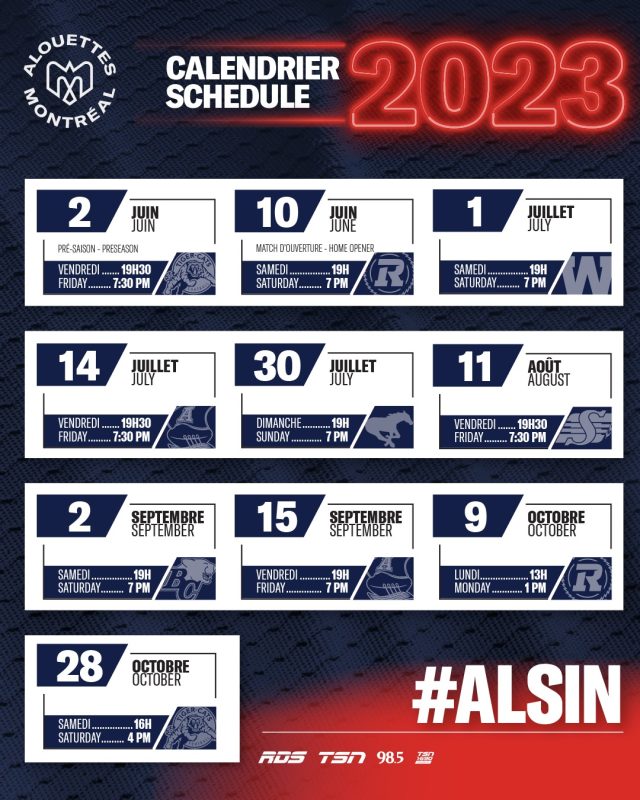 The Als will play two road games on Aug. 19 in Ottawa and on Aug. 24 in Winnipeg.

They’ll also have to host Ottawa on Thanksgiving Day Monday before taking a flight to Edmonton so that they can play the Elks on the following Saturday. In 2022, the Als hosted Ottawa on the holiday Monday, and they had to play on the following Friday, but the Redblacks were involved in both games. There wasn’t an advantage for anyone. The Elks will be well rested going into that game, as they’ll be playing in Toronto on the Friday before Thanksgiving.

One of the other things that stands out when looking at the schedule is that there is only one game on Thursday night, and that will be played in Winnipeg on August 24th.

The Alouettes will play three home games on Friday nights, four on Saturday, one on Sunday night, and one on Monday afternoon.

The Als will play every CFL team at least twice except for Edmonton and Saskatchewan. Montreal won’t be going to Regina in 2023 and the Elks won’t be visiting Percival Molson Stadium.

Keep in mind that the East and West semi-finals and the East and West finals will move from Sunday afternoon to Saturday. The times of the games will also change. Those games were typically played at 1pm and 4pm, but they will now be taking place at 3pm and 6:30 pm.