Preview: Alouettes look to win the East in Toronto on Sunday 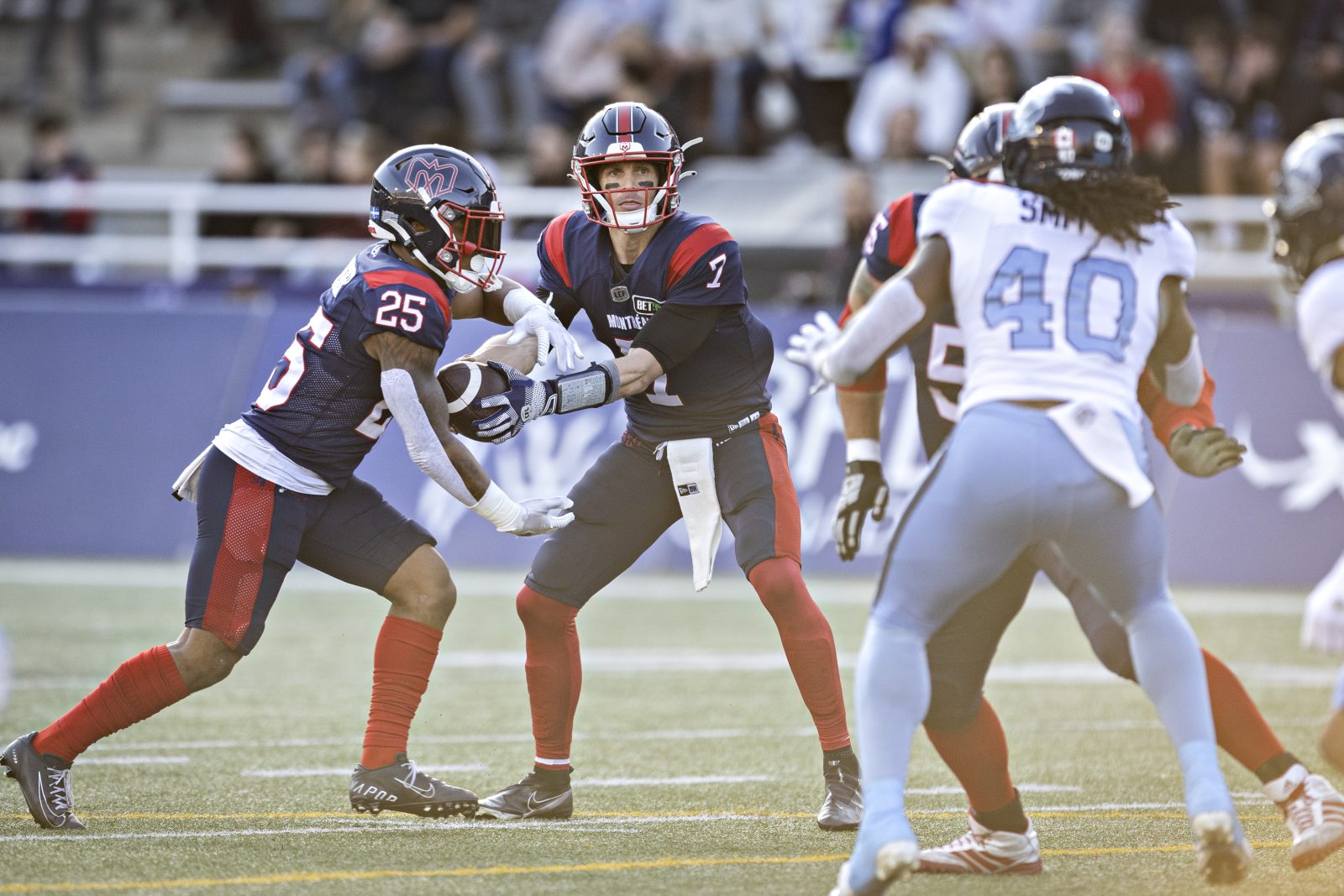 Preview: Alouettes look to win the East in Toronto on Sunday

A pair of veteran quarterbacks will be leading their teams into battle on Sunday afternoon. Trevor Harris is 3-3 as a starter in the playoffs, while Toronto’s McLeod Bethel-Thompson is 0-1.

Harris, 36, has started at least one playoff game in each of the last five seasons. During that stretch, he’s thrown 12 touchdown passes and seven interceptions. He has also averaged 363.5 passing yards per game while completing 76.4 percent of his passes in the postseason.

His best performance in an East Division Final game came in 2018 when he was a member of the Ottawa Redblacks. In a game against the Hamilton Tiger-Cats, Harris completed 29 of 32 passes for 367 yards and six touchdowns (not a typo) in a 46-27 victory.

In Bethel-Thompson’s lone playoff game, he completed 24/38 passes for 283 yards, no touchdowns, no interceptions in a 27-19 loss to the Ticats. That happened in last year’s East Division Final.

How do the Alouettes and Argos compare in 2022? Check out the numbers:

Don’t turn the ball over:

The Argonauts defence led the league in turnovers forced, with 48. As always, the Als need to make sure they always protect the football. Last week, Hamilton forced two turnovers. One was an interception in the first half, the other was a turnover on downs in the second. That didn’t end up hurting the Als because they managed to force three turnovers of their own.

Even though the Argo defence has a knack for taking the ball away from their opponent, the Als shouldn’t play scared, especially when they have playmakers like Geno Lewis, Jake, Wieneke, Tyson Philpot and Kaion Julien-Grant.

“It’s that old cliché: ‘scared money don’t make money’,” Harris said. “I feel like we’re a dangerous offence to defend as well. We’ve got quite a few weapons, we have a great run game, our offensive line is able to come downhill and get physical now. We know we’re going to bring it and they’re going to bring it as well. They want to right a wrong that happened to them in the East Final last year when they feel like they could have been to the Grey Cup. They’re going to be hungry, but we’ve got a hungry group as well. We’ve got a great thing going.”

The Als have a couple of key starters that were born in Toronto. Linebacker Chris Ackie is expecting 25 to 35 friends at BMO Field on Sunday afternoon. Ackie had a sack and a fumble recovery during last week’s win over the Hamilton Tiger-Cats. He, Tyrice Beverette and Adarius Pickett will have to set the tone physically on defence against the Argos.

Julien-Grant, who caught a touchdown pass the last time these two teams played in Toronto two weeks ago, is expecting 100 people from his entourage to be in attendance.

“It’s always great being home and playing in front of family,” Julien-Grant said after Friday’s practice. “I feel like I play better, and it makes the game that much more impactful in my life.”

Is the bye week really that big of an advantage for the Argos?

The Argos will be coming off a bye week because they finished first in the East Division. On top of that, they also rested most of their starters during the final game of the regular season against the Alouettes. So, most of Toronto’s key players haven’t played in a couple of weeks. How big of an advantage is that? Will it take time for them to get back into a rhythm?

“Being in that position, as a team, it all came down to the coaches and how much we were going to practice during that bye week,” Als QB coach Anthony Calvillo said when asked about the advantages and disadvantages of having a bye week in the playoffs. “There was a huge advantage in terms of resting guys and getting those guys back who were a bit banged up-. There really is a balance with everything as well. This is the second year in a row that Toronto will have that experience. They might have adjusted based on what they did the year before.

“There might have been times we were rusty (when we clinched first place), and people might have said it was because of the time off, but I really think it’s how you practice and the stuff you do during that time.”

Last season, the Argos hosted the Ticats in the East Division Final. The Argo defence didn’t seem to be affected by the long layoff, as they pitched a shutout in the first half. But the Toronto offence never took off. They had to settle for six field goals and a single.