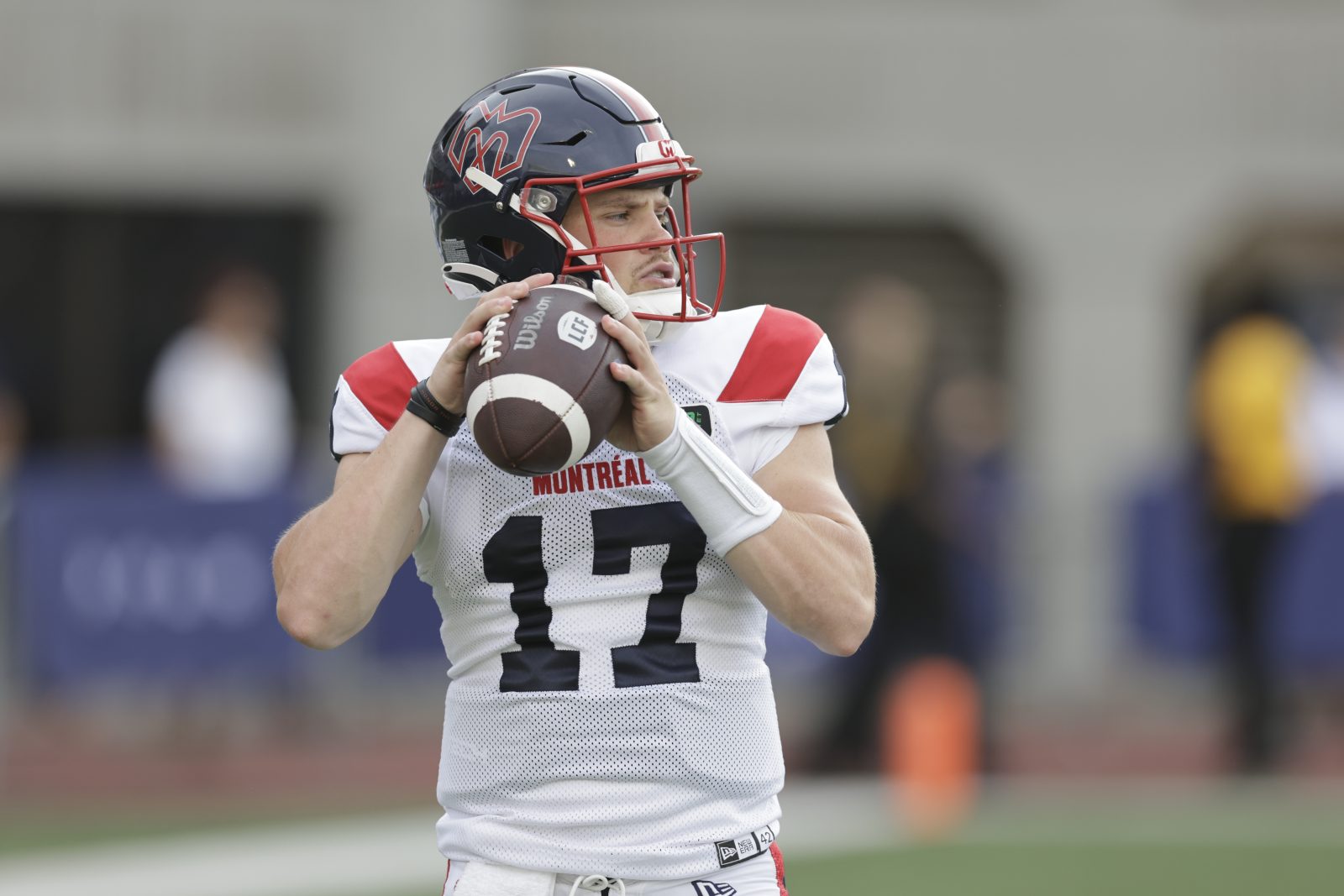 The Alouettes won their final regular season game of 2022, 38-33, over the Toronto Argonauts at BMO Field on Saturday afternoon.

After starting the season with a record of 2-6, the Als will finish 9-9.

Let’s look at how they were able to secure the win on Saturday:

Davis was 10-for-10 with 150 yards passing, two touchdown passes and one rushing touchdown after the first quarter. He finished 13-for-14, with 166 yards. His only incompletion wasn’t even his fault, as Cole Spieker deflected a pass that fell into Argos linebacker Shaq Richardson’s hands.

“I felt pretty calm and cool out there,” Davis said after the game. “The offensive line did a great job protecting me and the receivers did a good job catching the ball and making plays for me.”

Davis’ rushing touchdown allowed him to break the Alouettes franchise record for most rushing touchdowns by a quarterback in one season, with 13. The previous record was set by Vernon Adams Jr. in 2019.

“It feels good that I can be in the record book,” Davis added. “It’s a great accomplishment. I just want to thank the coaches for giving me the opportunity to have that role.”

The record-breaker by Dom Davis!

Alexander put together a solid performance too, as he made his first career CFL appearance. He also scored his first touchdown in the CFL on a quarterback sneak in the first half.

The 24-year-old was 8-for-13 for 89 yards and one interception. Those numbers aren’t eye-popping, but he also showed off his athleticism, composure, and his ability to bounce back after a tough play.

“I thought I played okay,” Alexander said after the game. “I wanted to play a lot better, obviously. There’s a couple of decisions I’d like to have back.

“Most importantly, I wanted the win, that’s all I wanted. Dom (Davis) was amazing and the defence really stepped up in the second half.

“It felt good. It felt like a good experience.”

Give this group of receivers credit for stepping up in the absence of Geno Lewis and Jake Wieneke. Spieker, Kaion Julien-Grant, Tyson Philpot, Kevin Kaya all made key plays at different times.

Spieker led the way with six receptions for 105 yards and one touchdown. This was just the second game of his CFL career but the first time he got to participate in a meaningful way on offence.

Welcome to the CFL Cole Spieker!!!

“Right when I saw the cornerback come down on Tyson (Philpot), I knew I had a chance at getting over the top,” Spieker said of his touchdown reception. “I saw Dom (Davis) launched it, it was a good ball and I adjusted, came back and made a play on it.

“Overall, I felt good with my performance. My teammates did a great job up front blocking and giving our quarterback time to deliver the ball down field.”

Julien-Grant, who had 60 family and friends at the friends at the game, finished with four catches for 55 yards and one touchdown. Philpot had five grabs for 47 yards, and Kaya made the first two receptions of his CFL career for 25 yards.

If you didn’t know who Jabari Ellis was before this game, you certainly know who he is now.

Ellis came up with a huge punt block at a crucial moment in the game. With the score tied, 28-28, Ellis got a piece of a John Haggerty kick. He then scooped up the ball in the end zone to restore the Alouettes’ lead to 35-28.

What a play by Jabari Ellis!!! 😏 pic.twitter.com/tlyEK2tlbr

It was a big moment in the game because it was the first time the Argos had to punt all afternoon, and they had just scored the game-tying touchdown on the opening kick-off of the second half a few minutes earlier.

The rookie’s huge play gave the Als the momentum back. Although the game was tight until the very end, they found a way to hang on.

What’s next?
It’s playoff time! You win or you go home! And it all begins next Sunday at Percival Molson Stadium against the Hamilton Tiger-Cats! The players need your support. They’d love to see you at the stadium making noise whenever the Tiger-Cats’ offence is on the field!