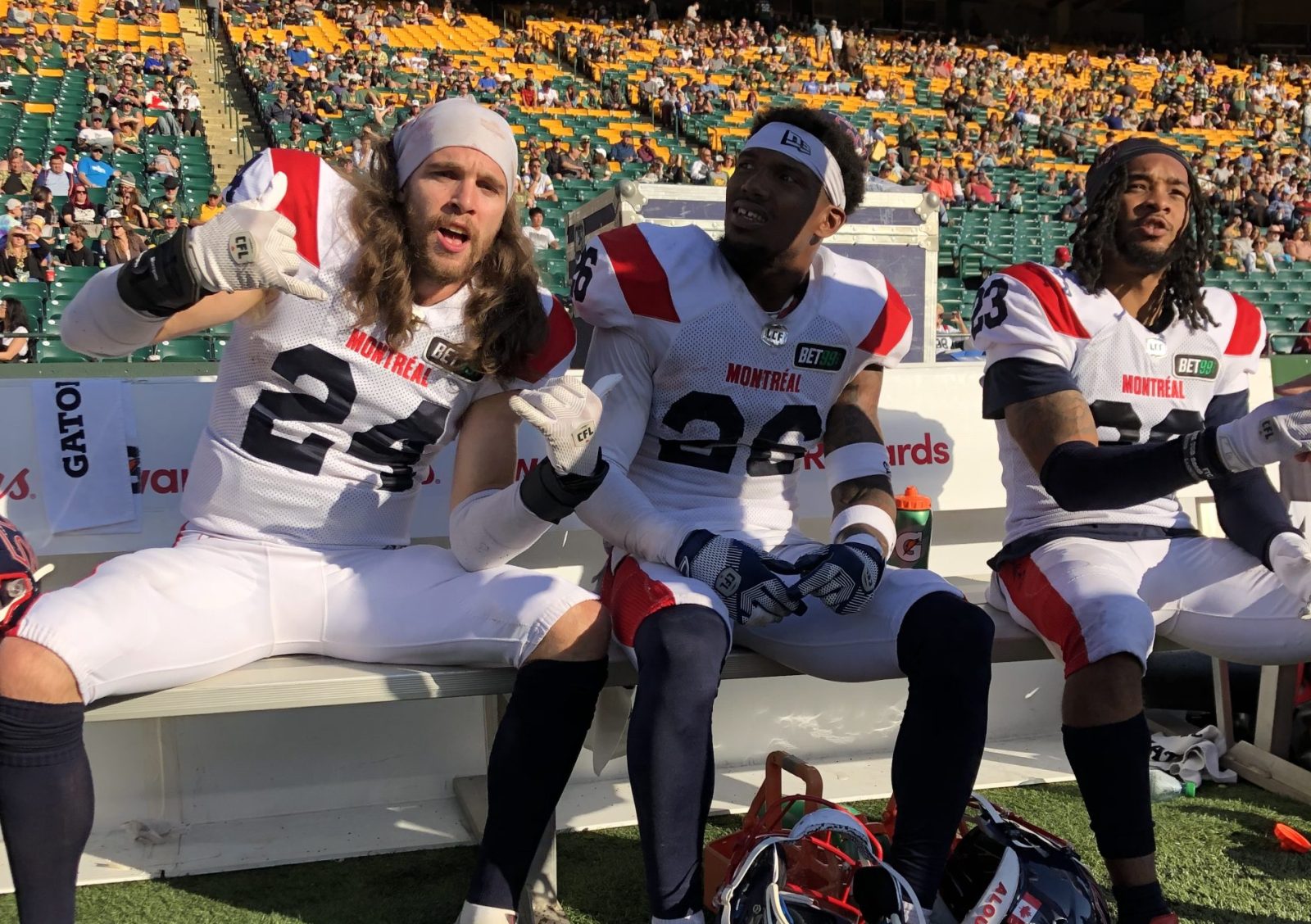 Good teams find a way to make clutch plays in the biggest moments.

That’s what the Alouettes defence did on Saturday afternoon in Edmonton. Not just once, but twice.

The win allows the Alouettes to get to .500 for the first time this season (7-7). They’ve now won five of their last six games!

If you missed the Alouettes post-game show on Facebook Live, you can watch it right here:

This was obvious to anybody who watched the fourth quarter!

Edmonton had a one-point lead heading into the fourth quarter and they were on their way to extending that advantage when Adarius Pickett deflected a Taylor Cornelius pass up into the air. Tyrice Beverette was able to snag it and run a LONG way to the end zone to give the Als the lead.

An INT + a 100-yard RUN! pic.twitter.com/oYlZOdKZIJ

“I felt my legs get heavy (laughs),” Beverette said after the game. “I just knew it was a big moment and I just had to block the fatigue out and make the team for my teammates. Shoutout to my teammates. They made some key blocks to help me get into the end zone.”

Beverette is right. He made the big play, but Pickett tipped the ball, and others, including Marc-Antoine Dequoy, hustled up the field to make key blocks.

This was the third time in franchise history that a defensive player has scored a touchdown on an interception return of at least 100 yards. Hall of Fame defensive back Dickie Harris had a 118-yard return for a touchdown in a game against Ottawa in 1972. Fellow hall-of-famer Barron Miles had a 101-yard return against Toronto in 1999.

As if that wasn’t enough, the defence made a second stop deep in their own territory when they forced a turnover on downs. Elks running back Kevin Brown ran the ball very well the entire game, but there was simply no opening for him on third-and-goal from the Montreal three-yard line.

Let’s not forget that middle linebacker Micah Awe had an interception on Edmonton’s final drive when they still had an opportunity to tie the game. A three-turnover quarter is exactly what the team needed at the time.

It wasn’t all perfect tonight. There were penalties that extended Elks drives and penalties that negated turnovers, but the group stuck together and got the job done.

Good teams find a way to win these games.

We know that Geno Lewis is one of the best receivers in the game. The reception he made in the Edmonton end zone in the first half was simply ridiculous.

Elks defensive back Ed Gainey is hanging on to Lewis for dear life and he still can’t prevent him from making the grab.

“Honestly, that’s something that I practice,” Lewis said of making one-handed catches. “I’m a late-hands type of guy when I catch the footballs, but on that one, he had my right arm inside, so I knew there was no way I was going to be able to get it up. I knew I could catch it with one hand, so I just wanted to make the play and get two feet in. That’s a hell of a catch though (laughs).”

Another moment that was caught on camera occurred late in the second half. The Alouettes had just taken a couple of bad penalties, which was a theme on Saturday, and Lewis approached defensive end Jamal Davis to address the flags that had just been called on the team.

“I always say that penalties and turnovers are the fastest way to lose a game,” Lewis added. “At the end of the day, we definitely have to fix those things and make sure we don’t give other teams life and give them another opportunity to beat us.”

A MILESTONE FOR HARRIS

The 36-year-old was so sharp and efficient in the first half. The Als moved the ball well for most of the opening 30 minutes. It’s tough to blame Harris for his second-quarter fumble because the pressure got to him in a hurry.

In the end, his individual numbers won’t blow you away, but he came through with a solid performance against his former team.

He finished the night 14/17 (82.4 percent), for 180 yards and a touchdown pass. The offence didn’t get many opportunities in the second half because the Elks were able to go on long drives and, of course, the Beverette touchdown.

The running game continues to find success, as Walter Fletcher and Jeshrun Antwi for 90 yards on 18 carries. Fletcher had 67 of those yards, while Antwi rushed 23.

Fletcher fumbled the ball in the second quarter, but he also helped set up Dom Davis’ first-quarter touchdown with a 12-yard run that took the ball to the one-yard line.

William Stanback is closing in on a return, which is great, but these two running backs deserve a lot of credit for what they’ve done in the last few weeks.

Speaking of Antwi, he executed a perfect fake punt in the second quarter. He took a direct snap and was able to get the offence an extra possession. Unfortunately, it didn’t result in any points for the Als, but Byron Archambault’s special teams unit continues to keep the opposition on their toes.

It’s remarkable to see how much this unit has improved in 2022. They come up with huge returns or some trickery fairly often, and they’ve done a great job of limiting the number of no-yards flags they take.

A SPECIAL NIGHT FOR MACIOCIA:

The Alouettes have a 6-4 record since Danny Maciocia took over as head coach earlier this season.

As much as he downplayed his return to Edmonton throughout the week, Maciocia admitted after the game that this win was a little more special for him.

“You really want to know how I feel about?” Maciocia said after the game. “I’m going to have to admit it. I have my family here with me. There was a lot of reminiscing here over the last 24 hours. I had a great time. I enjoyed my experience in Western Canada. It was very gratifying, and I met a lot of great people here. We went to three Grey Cups, we won a couple, but hell yeah it feels good!”

Maciocia was with the Edmonton organization from 2008. He served as offensive coordinator, head coach and general manager during his time there.

The Alouettes will enjoy a couple of days off before they get back to work. The team won’t be back on the practice field until Thursday because their next game will be played on Thanksgiving Monday at home against the Ottawa Redblacks.

The players and coaches will be making their yearly hospital visits next week, as they’ll head to Sainte-Justine and Montreal Children’s Hospitals on Wednesday.