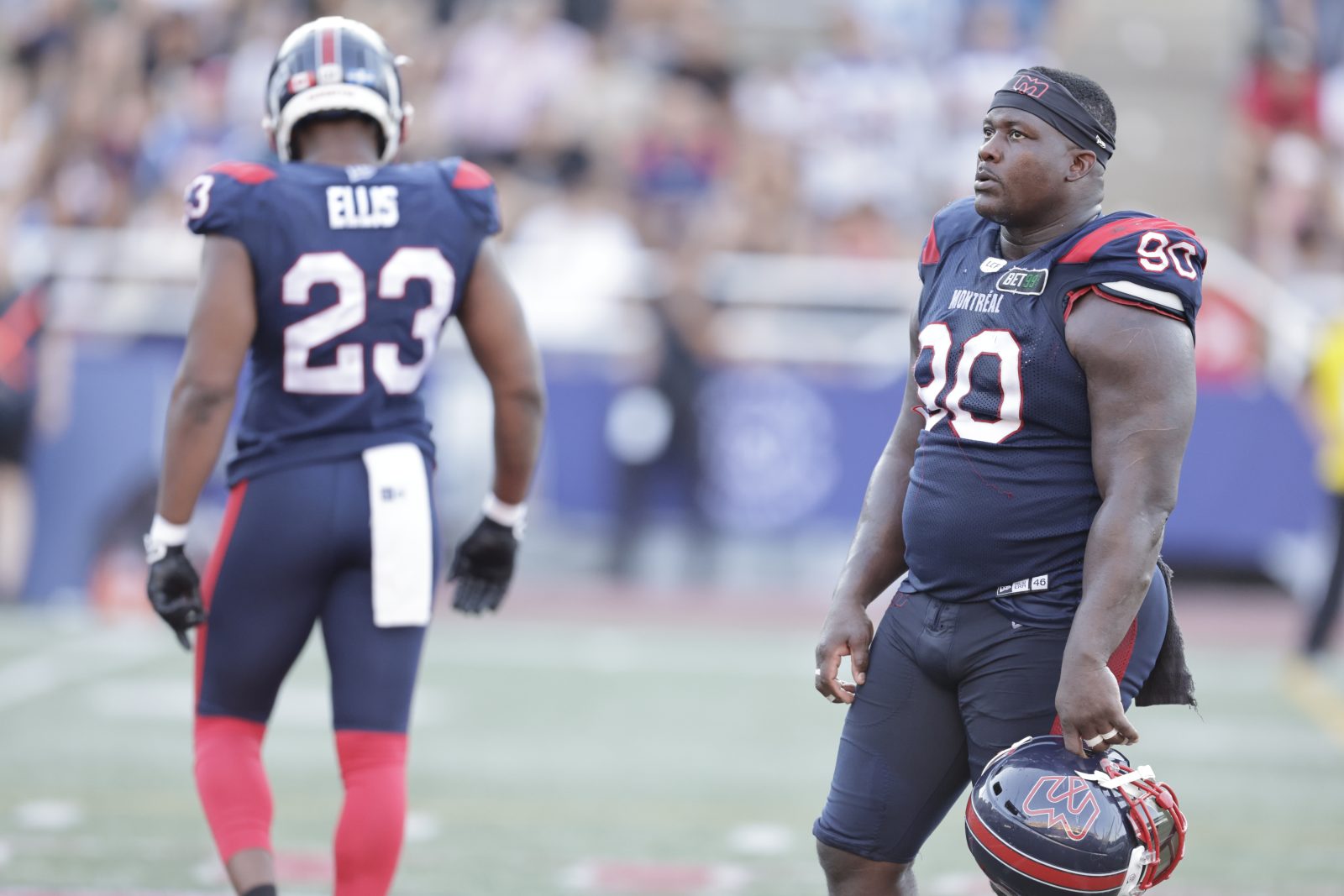 When you think of a leader on a football team, you probably envision someone who is loud and boisterous. Maybe that person stands up in the middle of a huddle and fires the whole team up before a game. But not every leader needs to be vocal in the locker room. The Alouettes have leaders who talk, but they also have one that leads by example.

You might go an entire football game without noticing veteran defensive tackle Almondo Sewell. That’s how it goes for defensive tackles most of the time, but don’t think for a second that he isn’t a vital part of this team.

For fans and media, defensive linemen are typically judged by the number of sacks they accumulate in a game. There’s a lot more than goes into playing in the trenches though.  Sewell is a prime example of that. The 35-year-old has a modest two quarterback sacks and 16 defensive tackles in 12 games this year, but the attention he commands from the opposition makes him a crucial piece of the defence.

It’s quite common for Sewell to be double or triple-teamed on certain plays. While he’s taking on two or three offensive linemen, some of his teammates benefit from more favourable matchups.

“That’s the life you live as a nose tackle,” Sewell said with a chuckle after Monday’s practice. “You’re going to get double teams. I played in a similar (defensive) system like this before in 2015 when we won the Grey Cup with Edmonton. You’re going to take on a lot of double teams when you play in a three-man front.

“You’re going to get teed off on a lot during the game because that guard is coming. You just have to keep plugging away.”

It’s not a glamorous role, but one that has made Sewell a shoo-in for the Canadian Football Hall of Fame whenever he decides to retire. That still doesn’t make it easy. It’s punishing to go up against those massive offensive linemen on every snap.  To deal with that and to not get the recognition in the form of sacks and tackles is further proof that the veteran is as unselfish as they come.

“He draws two and three (offensive linemen) on every snap,” defensive line coach Greg Quick said. “So, if there are two or three going to him, then there’s somebody else that is unblocked, whether it’s a pass-rusher or a linebacker or a defensive back.

“A lot of the work he does benefits the team. People wonder: How has Montreal turning and rolling in the direction that we are? It’s because of unselfishness in men like Mondo Sewell, whose unselfishness drives this team.”

Sewell isn’t vocal in the locker room, but he does talk to his teammates individually when he thinks he can help them. For example, Quick credits some of rookie defensive tackle Mustafa Johnson’s quick adaptation to the Canadian game to Sewell, who has worked with him behind the scenes.

“When you’ve been around long enough and you’ve played a lot of ball, (you can do that),” added the former University of Akron Zip. “I had the same thing when I first got in here, too. I would’ve talked to guys like John Chick, Odell Willis, and all those guys did the same thing for us too. Yeah, those guys were a little more vocal, but I like to pull guys aside and tell them to try different things out on the field. It might work for (them).

“Especially for the American guys who just came up here, where the steps are a lot different. (In the States), you’re right up on the ball. Up here, you’re a whole yard off. You can elongate a step out there and set up your moves that way, instead of everything that needs to happen right now. It’s just one of those things where I help. I’m not scared to tell anybody what they have to do (laughs).”

One of the other things that jump out about Sewell, is that his effort level doesn’t drop during practice. It’s no secret that certain veterans across pro football enjoy taking it easy during portions of practice. That’s not the case with Sewell. He brings it on every snap.

“You can’t be complacent,” Sewell admitted. “Being consistent is probably the hardest thing you can do in life. That’s what we always say in our leadership groups, and we make sure that the guys on the team that are leaders keep saying the same message. Don’t get comfortable, don’t get complacent because we’re the only ones who can hurt ourselves. You’ve seen the games we’ve lost. We come out flat, nobody’s ready to play, and you lose to a team that you’re not supposed to lose to.

“Danny (Maciocia) did a good job of putting this group together to make sure we keep doing the same thing over and over again. We’re in pads on Day 1 (of practice). It’s a ‘compete’ practice so you’ll probably lose your job that week if you come out here and you’re not ready to play.

“At the end of the year, when we make it to the Grey Cup and win the Grey Cup, then you can relax, but this is business.”