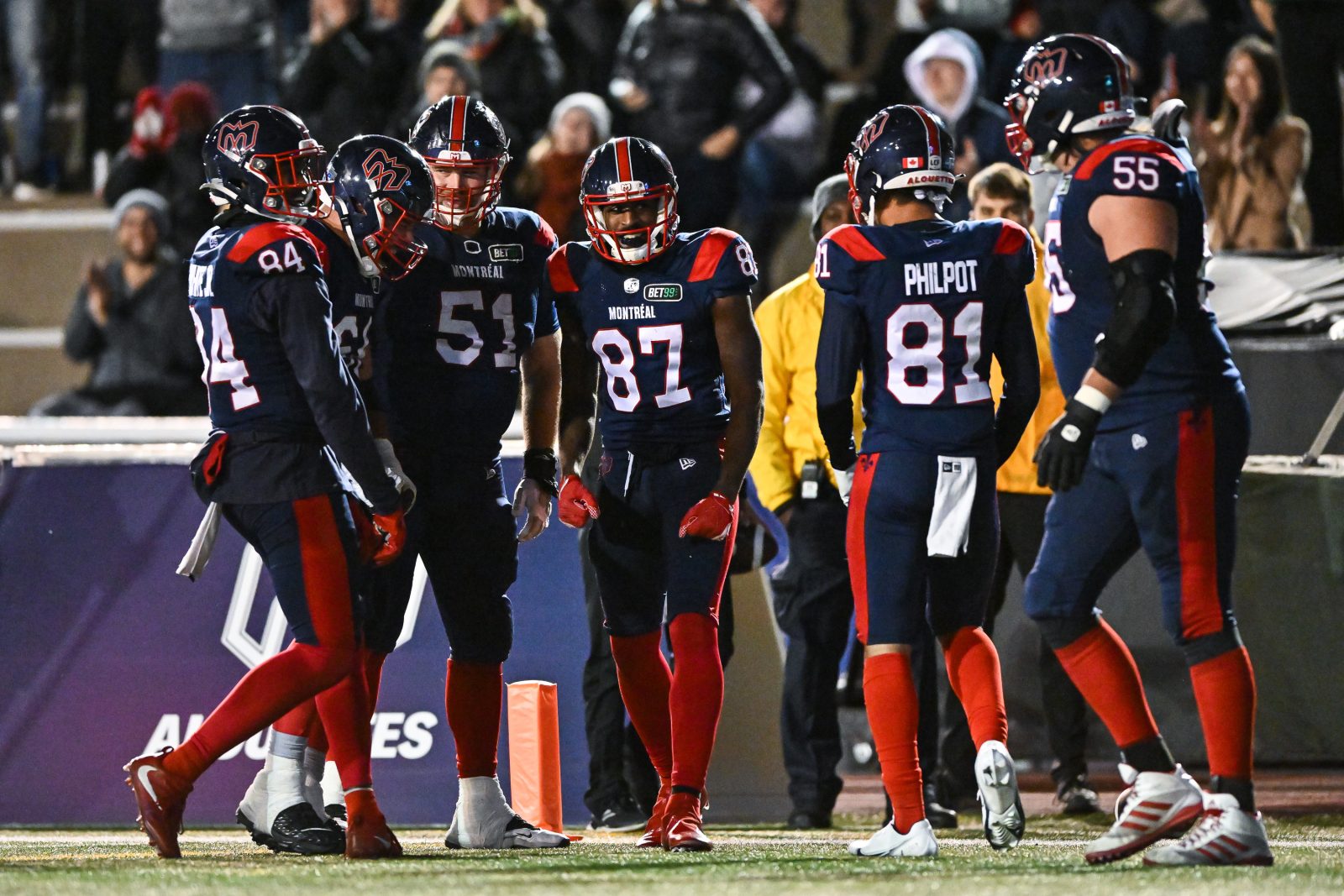 It doesn’t happen often, but sometimes you can just get a sense of how big a game is by the buzz around field level during the pre-game warmup. That’s how it felt on Friday night. You could tell that this game was so important to both these teams. It felt like a playoff game.

ICYMI: Check out the Alouettes postgame show on Facebook after every game! Here is last night’s show!

In the end, the Alouettes put together a solid second half and they were able to win, 23-16, which means that they’re now two wins ahead of Hamilton with a game in hand and they come away with the season series (2-1).

How did they get it done?

Trevor Harris lights out in the second half:

The Alouettes offence produced just three points in the first half (zero in the first quarter, three in the second), but things changed in a big way over the final 30 minutes. They came out in the third quarter, moved the ball down the field and scored points.

This group is at their best when they’re spreading the ball around, and that’s exactly what happened tonight. The entire offence deserves credit for that, but I’m going to single out Harris right now. He was calm, stood tall in the pocket and connected with eight different targets.

When it was all said and done, he finished 26/35, with 244 yards, two touchdowns and no interceptions. He was very good when it mattered most.

How clutch was that final drive of the game?

On the first play of the drive, Walter Fletcher ran though the B gap (between the centre and guard), and he picked up 21 yards.

On second-and-seven, Harris hit Reggie White Jr. for a first down.

On first-and -10 from the Hamilton 33, Harris threw a quick pass to his left to Tyson Philpot for a gain of seven.

The Als had a second-and-three, when Harris tried to connect with Geno Lewis. The pass fell incomplete, but Ticats defensive back Jumal Rolle was called for pass interference.

On first-and-goal, Jeshrun Antwi picked up a small gain on a pass from Harris.

And on second-and-goal, Harris hit Lewis in the corner of the end zone for a touchdown.

HARRIS FINDS LEWIS FOR THE TD 🚨

The mentality wasn’t to go up by two points with a field goal, it was to deliver a knockout punch to the Ticats and that’s what they did.

White Jr. caught a jump-ball in the end zone on the two-point convert. With that, they took a seven-point lead.

We also have to mention the performance from the big boys up front. The offensive line did a remarkable job against a tough defensive line. With Phil Gagnon banged up, P.O. Lestage made his first career start, and the group didn’t seem to miss a beat.

They also opened up great running lanes for Fletcher and Antwi, who both averaged more than five yards per carry in this game.

“Football is won in the trenches,” Antwi said after the game. “Offensive line against defensive line. If you have good guys up front, things will work out. They protected us, they opened massive gaps for us. When I was running, I was like, ‘nobody is touching me for at least 10 yards.’ You can see it on the field.”

Lewis has been the most consistent player on offence since the start of the year. Not only did he lead the team in receiving on Friday night, not only did he record two touchdowns including the game-winner, but he also surpassed the 1,000-yard mark for the second time in his career.

Only Ottawa’s Jaelon Acklin and BC’s Dominique Rhymes have more receiving yards that Lewis’ 1,006 so far in 2022. He’s also tied for fourth in the CFL in receiving touchdowns, with seven.

“The sky is the limit,” Lewis said on his individual goals for this season. “As long as we win, the sky is the limit for how many yards I can get. At the end of the day, I just want to keep doing what I have to do, keep grinding to lead the league, and just go get it.”

Defence comes up with timely turnovers:

The Als defence took the ball away from the Ticats offence twice, and they both came at critical times in the game.

The first one happened with less than three minutes remaining in the third quarter with the Tiger-Cats leading, 13-12. Hamilton went for a third-and-three from the Montreal 51-yard line.

Ticats quarterback Dane Evans threw a pass to Tim White, but Als defensive back Raheem Wilson was in good position to ensure he didn’t catch the pass.

The Alouettes ended up getting the ball inside the Hamilton 10-yard line before settling for a field goal, which gave them a slim, 15-13, advantage at the time.

The second turnover came late in the game when receiver Kiondre Smith fumbled. Defensive tackle Mustafa Johnson recovered, and the offence was able to kill the clock.

Penalties and discipline were an issue early on in the season, but this team has turned a corner over the last few weeks. Coming into Friday’s game, the Als had taken fewer than 50 penalty yards in back-to-back games.

They finished with five penalties for 84 yards against the Tiger-Cats, but most of those yards came on a long pass interference penalty against Wilson in the second half. Regardless, they still won that battle, as Hamilton took 12 penalties for 130 yards.

“Coach (Maciocia) always talks about penalties,” White Jr. said on the Alouettes post-game show on Facebook Live. “We had to get the penalties down. Whether it was offence, defence or special teams, we all focused in. We locked in today. We had a couple of penalties here and there, but not too much.”

Exactly one week after signing a contract with the Alouettes, Jamal Davis managed to collect his first quarterback sack of the season.

“It felt amazing,” Davis said of being back on the field with the Alouettes. It felt great to be with my teammates, the coaches and the whole front office. Everyone was out on the sideline going crazy tonight.

“I saw the tackle, and he kind of overset me, so I wanted to go in with power. I’m just happy that it worked…It was a huge moment and a huge momentum changer.”

Also, kicker David Cote hit his first career field goal from beyond 50 yards, as he put the ball through the uprights from 51 yards.

After the game, Cote admitted that it probably would’ve been good from 55.

According to David Arsenault of RDS, Cote became the first kicker to hit a field goal of 50plus yards since Boris Bede did that on June 14, 2019.

It was nice to see Chip Cox and Kyries Hebert in Montreal again. Those two defensive players were so important to the fabric of his team for a long time.

Hebert signed a one-day contract to retire as an Alouette on Thursday, while Cox was honoured at halftime of Friday night’s game.

The Alouettes (6-7) will now play their first road game since Aug. 11, as they’ll take on the Elks in Edmonton next Saturday afternoon at 4pm.

The Montreal Alouettes have the best winning percentage in the CFL since Week 9 (4-1, 0.800)