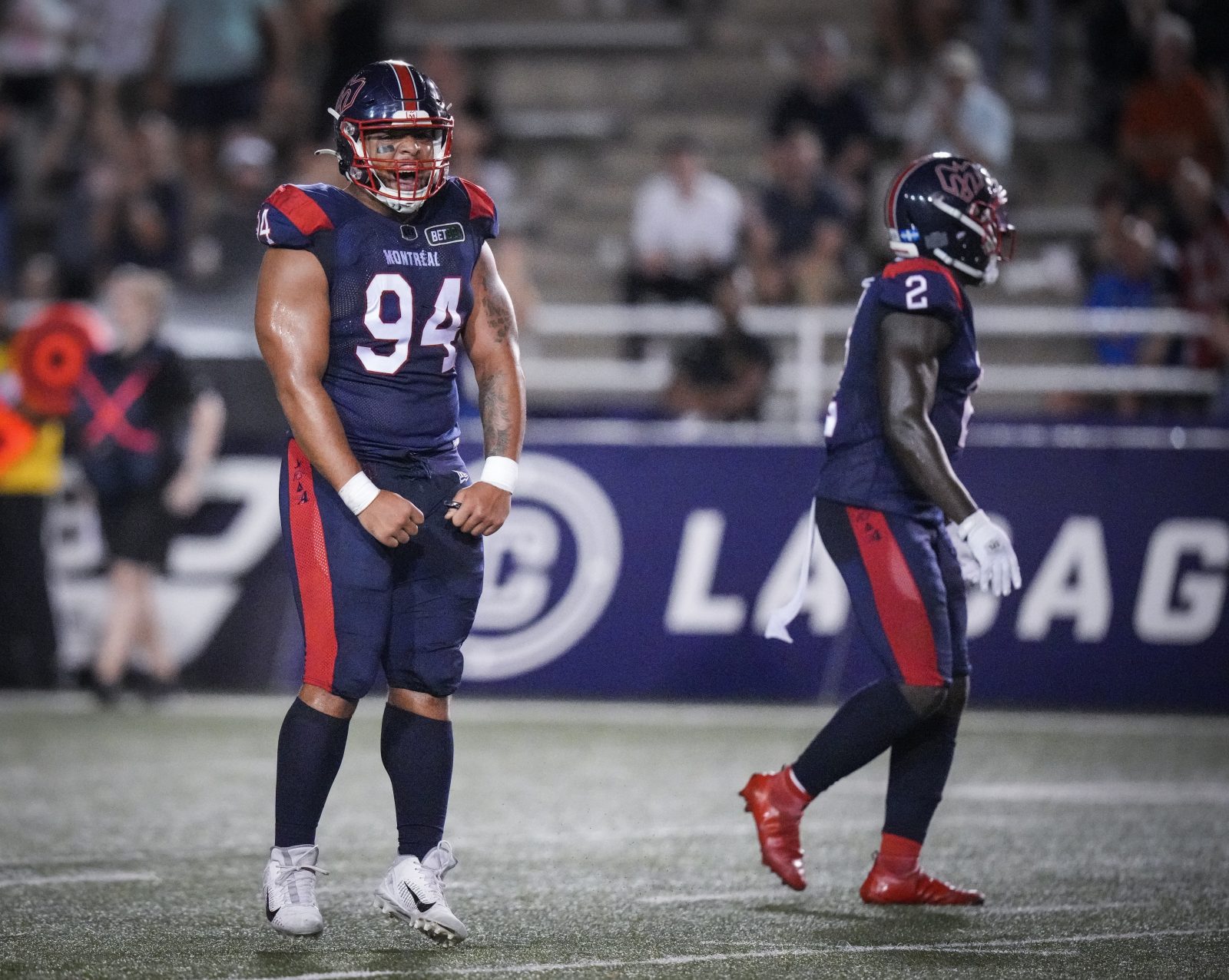 The Alouettes got back in the win column with a 31-10 victory over the BC Lions at Percival Molson Stadium on Friday night.

The players and coaching staff will be the first to tell you that there is still room for improvement. All three phases of the game need to be more consistent from week to week, but this team has still managed to rattle off three wins in their last four games.

We’ve seen the offence perform well at times this season, we’ve seen the defence dominate and we’ve seen huge plays on special teams. If this team can put it all together over the final six games of the regular season, they’re going to be tough to stop.

If you missed it live or if you want to watch it again, make sure you check out the Alouettes Postgame show on Facebook Live after every game. Click the link to watch last night’s show! Hear from the coach and several players!

There are a lot of positives to get to tonight, so let’s do it!

Do you enjoy big plays on defence? Well, if you do, you must have enjoyed the performance by Noel Thorpe’s unit on Friday night.

The Als were able to get the Lions to give them the ball back on six different occasions. Some of those turnovers came at very crucial times.

A lot of players stood out in this one, and we’re going to try to highlight as many as we can here.

Marc-Antoine Dequoy, who exited the game with what looked like a bad knee injury at the time, managed to return to the game. Before he got hurt, he stripped Keon Hatcher of the football. Tyrice Beverette recovered.

Dequoy also recovered a crucial fumble while the Lions were driving into Montreal territory while trailing by 11 points. That Adarius Pickett forced fumble swung momentum the Als’ way again.

“That was almost the final nail in the coffin, but what really put the game to bed was Lyon’s interception returned for a touchdown,” Dequoy said after the game. “It’s really difficult for a team to come back from that. The momentum, especially in football, is so important. It’s tough to come back from a play like that.”

Rookie defensive tackle Mustafa Johnson made a huge impact on this game too. In the first quarter, with the Als trailing 3-0, Johnson managed to sack Lions quarterback Antonio Pipkin in the BC end zone to force a safety. That was his first career sack.

His second sack was even more important, as it came on a third-and-goal play deep in Alouettes territory. The 23-year-old brought Pipkin down again, and the Als got the ball back thanks to a turnover on downs.

“It was actually really hard for me (to adapt to the CFL game),” Johnson said with a laugh. “The biggest thing was adapting to that one-yard change. I’m so used to hitting (the offensive line) right away. Now, it’s a little slower. Not slower, but it’s delayed. In the first two weeks, I’m pass-rushing and I’m throwing moves on air because (the offensive line) was still two yards back (laughs). I have to adjust to it, but I’m a football player so I’ll figure it out.”

Johnson only joined the team a few weeks ago and this was just his second career CFL game.

The two players the Als acquired from Edmonton last week both made an impact on Friday night.

Cornerback Nafees Lyon put the game to bed when he intercepted Pipkin in the fourth quarter and turned it into a touchdown with a flashy spin move near the goal line.

Nafees Lyon bolsters the Als' lead with an interception returned for 6! #CFL pic.twitter.com/kIhyj3spTV

Not only did defensive end Thomas Costigan force a Pipkin fumble late in the game, but he also recovered it.

We can go on and on about the defensive performance. Wesley Sutton, Mike Jones, Micah Awe, Nick Usher, and others really stepped up on Friday night. They helped set the tone for the game.

First play against his former team, Vernon Adams Jr. is dropped for a sack! 🤐 pic.twitter.com/BDqENuNk4j

The defence wasn’t alone in setting the standard for this game. Every aspect of the team’s special teams play was spot on too.

This is where we have to mention Zach Lindley’s performance. The rookie has been a special teams revelation this season. He was selected in the eighth round of the 2022 CFL Draft, made the practice roster out of training camp, and has now become a fixture in the lineup.

Although he admitted on the postgame show that he didn’t get a piece of the punt he appeared to block in the first half, the fact that he was coming towards the punter surely affected the play. He also made a key tackle on the Lions’ fake punt attempt that resulted in a turnover on downs in Montreal’s favour.

Returner Chandley Worthy did what he normally does. He had an explosive return that gave the offence incredible field position in BC territory.

Chandler Worthy turns the corner a returns the kickoff 51 yards for the Als! #CFL pic.twitter.com/NP91Kq7UBr

“To be honest, when I came in, because I came in (to training camp) late, I had no idea he hadn’t coached (at the pro level) before,” Worthy said of Archambault. “I assumed he had been coaching for years because of his approach to the game. He comes in so detailed. He comes in and is just open and honest. He puts us in a position to make great plays. He’s honestly the best I’ve ever had just because he’s passionate about it and he’s right there with us. He has energy as if he’s a player.”

Room for improvement on offence

The offence was efficient in the first half. They didn’t put up big individual stats, but they still managed to score 21 points in the opening 30 minutes.

In the second half, when they could have put the game to bed, they failed to go on long drives. In the end, it didn’t matter because the defence forced a bunch of turnovers. That’s the way football is sometimes. One unit picks up another, which is okay. We’ve seen the offence perform at a very high level, but they need to do it consistently.

“I think our defence did a tremendous job,” quarterback Trevor Harris said after the game. “Offensively, I thought we were lackluster in the second half. That can’t happen. To be a thoroughly dominant team, our defence needs to do that, but we also need to take drives, put the ball in the end zone, sustain drives, stay on the field and keep our defence off the field because a lot of times the best defence is the offence staying on the football field.

“We just have to make sure we keep our foot on the gas in the second half.”

That doesn’t mean there weren’t positives on the offensive side of the ball.

Harris is developing a special connection with Reggie White Jr. On three separate second-and-long situations, Harris found White to move the chains. The Als receiver has clearly emerged as the number two option in the passing game behind Geno Lewis, who scored another touchdown tonight.

Another positive on offence was the production they got from their running backs. It’s the second week in a row that Walter Fletcher and Jeshrun Antwi work together to give the Als a productive run game.

Fletcher finished with 79 yards on 14 carries, while Antwi picked up 41 yards on seven rushing attempts.

Oh, and here’s a fun fact for you:

The Alouettes will have their final bye week of the season this coming week. They’ll return home to take on the Hamilton Tiger-Cats on Sep. 23.